FOR AS LONG AS THEY HAVE EXISTED, comic books have inspired both children and adults with their bold covers and striking images inside. Their clean, stylized imagery and legible typography are a large part of why comic books are so attractive to readers, including contemporary graphic designer Chip Kidd. Kidd, along with his roles as author and art director, is best known for his book cover designs, which are widely loved by designers and ordinary readers alike and have earned him a medal from the American Institute of Graphic Arts (AIGA). Kiddâ&#x20AC;&#x2122;s designs possess the bold, striking qualities of comics, even when they involve photography and text over illustration. The noted superhero comic fan was born in 1964 and graduated from Penn State with a degree in graphic design in 1986 (Lupton). Out of college, Kidd started his long-running career designing for Knopf Publishing Group, 3

though he has also designed covers for other publishers including HarperCollins and Scribner (Vit 192). His love of comics has won him renown, as “he is also known as one of the world’s leading Batman experts” as well as the author and designer of the book Batman Collected (Lupton). One of Kidd’s most famous and recognizable cover designs is the dinosaur skeleton silhouette used for both the book and movie of Michael Crichton’s 1990 work Jurassic Park (Lupton). More recently, Kidd has worked on graphic novels and guides to graphic design for young people, including his books The Cheese Monkeys (2001), The Learners (2008), and Go: A Kidd’s Guide to Graphic Design (2013) (Vit 192, Lupton). Kidd’s versatility in design and ability to capture the attention of all ages has contributed to his success as a book designer and graphic artist. 5

Some of Kidd’s best-renowned covers are those that appear simple at first glance but contain layers of meaning. For example, his cover for The Wind-Up Bird Chronicle by Haruki Murakami features an extreme close-up of a toy bird with “only the barest of text: title and author’s name” and no extra written blurbs (Mod 122). Even within this simplicity, “the cover is alive,” as all the elements of text and image draws the readers’ attention “first to the center, then along the edge to the spine” so they feel urged to turn it over and look at the other side, too (Mod 122). By 2008, Kidd had designed roughly 1,000 book covers, and that number has only grown since then (Vit 192). According to Kidd, “the challenge as a designer in trade publishing is to do something that’s an interesting design, but that also has mass appeal,” a challenge that he often approaches by avoiding the 7

Cover for Only Whatâ&#x20AC;&#x2122;s Necessary: Charles M. Schulz and the Art of Peanuts by Chip Kidd

literal interpretation of the book’s title (Blumberg). He has used this method in book covers such as the one for David Sedaris’ Naked, whose cover features a photo of a pair of boxer shorts. Other covers of his do illustrate the title literally but focus on a small part of a larger whole, such as his cover for Only What’s Necessary: Charles M. Schulz and the Art of Peanuts (2001), which features an extreme close up on the face of Charlie Brown. Kid’s covers have “layers and materiality and physicality, made for print and print alone,” which is what makes them so successful and memorable (Mod 122). Unlike music albums, which are nearly obsolete in a world of digital downloading, and magazine covers, which try to cram in as much information as possible, Kidd said book covers give designers the freedom to “just suggest a sensibility” and be “a lot more discrete” with 9

the design’s message (Blumberg). As a testament to this, Kidd’s subtle cleverness is apparent in all of his cover designs. From his earliest designs to his most recent, Kidd has paved a way for young designers to appreciate the composition, craft, and whimsy of book cover design, and continues to inspire this love in others. As one of the most influential book designers of today, it is no surprise he was the 2014 AIGA medalist for his contributions to graphic design. Kidd’s sense of humor and sense of design, both gained from years of experimentation and practice, shine through in all his work, whether through image, writing, or art direction. –•–

Cover for The Cheese Monkeys by Chip Kidd 12

Cover for The Learners by Chip Kidd 13

Cover for Naked by David Sadaris 15

Cover for The Little Friend by Donna Tartt 17

Cover for The Godfather of Kathmandu by John Burdett 18

Cover for Kafka on the Shore by Haruki Murakami 19

Cover for A Marker to Measure Drift by Alexander Maksik 20

Cover for Plays Well with Others by Allan Gurganus 21

Cover for A Rabbitâ&#x20AC;&#x2122;s Eyes by Kenjiro Haitani, translated by Paul Sminkey 22

Poster for the musical Letâ&#x20AC;&#x2122;s Give It Up for Lysistrata Jones, book by Douglas Carter Beane, music and lyrics by Lewis Flinn 23

Cover for Spillover: Animal Infections and the Next Human Pandemic by David Quammen 24 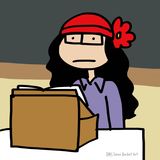