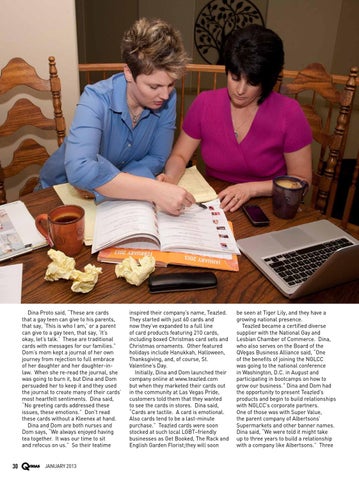 Dina Proto said, “These are cards that a gay teen can give to his parents, that say, ‘This is who I am,’ or a parent can give to a gay teen, that say, ‘It’s okay, let’s talk.’ These are traditional cards with messages for our families.” Dom’s mom kept a journal of her own journey from rejection to full embrace of her daughter and her daughter-inlaw. When she re-read the journal, she was going to burn it, but Dina and Dom persuaded her to keep it and they used the journal to create many of their cards’ most heartfelt sentiments. Dina said, “No greeting cards addressed these issues, these emotions.” Don’t read these cards without a Kleenex at hand. Dina and Dom are both nurses and Dom says, “We always enjoyed having tea together. It was our time to sit and refocus on us.” So their teatime

inspired their company’s name, Teazled. They started with just 60 cards and now they’ve expanded to a full line of card products featuring 210 cards, including boxed Christmas card sets and Christmas ornaments. Other featured holidays include Hanukkah, Halloween, Thanksgiving, and, of course, St. Valentine’s Day. Initially, Dina and Dom launched their company online at www.teazled.com but when they marketed their cards out in the community at Las Vegas Pride, customers told them that they wanted to see the cards in stores. Dina said, “Cards are tactile. A card is emotional. Also cards tend to be a last-minute purchase.” Teazled cards were soon stocked at such local LGBT–friendly businesses as Get Booked, The Rack and English Garden Florist;they will soon

be seen at Tiger Lily, and they have a growing national presence. Teazled became a certified diverse supplier with the National Gay and Lesbian Chamber of Commerce. Dina, who also serves on the Board of the QVegas Business Alliance said, “One of the benefits of joining the NGLCC was going to the national conference in Washington, D.C. in August and participating in bootcamps on how to grow our business.” Dina and Dom had the opportunity to present Teazled’s products and begin to build relationships with NGLCC’s corporate partners. One of those was with Super Value, the parent company of Albertsons’ Supermarkets and other banner names. Dina said, “We were told it might take up to three years to build a relationship with a company like Albertsons.” Three 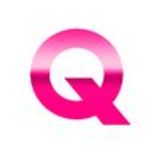