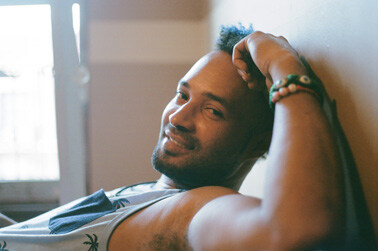 “I lived in the Lower East Side until I was 15 years old. Old stores and buildings were renovated, and the value of the area skyrocketed. Watching LES become the cool ‘hipster’ place to go drink and party made me appreciate the little things this city has to offer. So, before you buy at a chain, check out your local bodega.”

“When I started living here fulltime, I thought I would rather be surrounded by lions than by sheep. However, I quickly learned to be careful what you pray for because it crushes and rebuilds you in ways unimaginable.”

“After living in other cities, when I come back to New York, I realize that it is the only place on earth where my personality and the city actually have real chemistry.”

“Being exposed to so many personalities, people from different economic standings and backgrounds from young has made me more adaptable. New York has made me, me. I really don’t concern myself with others unless it’s relevant to me. Why? Because it’s not my business!”

“There is no need to ‘follow the herd’ here. New York has given me a multidimensional point of view towards myself and others.”

“They say that when folks get a limb amputated, they can still feel that missing piece of themselves even when it’s no longer there. New York is like a phantom limb, an invisible segment that I take with me everywhere, even though the outside world cannot see it on my body.”

“When I first moved to NYC, I used think, ‘This is the best city in the world!’ After a couple of decades, I often think how much of a dump this place is. It’s filthy, it smells, our subways run terribly, we pay exorbitant amounts of money to live in tiny rundown shoeboxes–yet every time I leave town, I’m always happy to come home.”

“Living in the city has shattered my perceptions of how different everyone is from each other. Seeing everyone in the train cramped together no matter your socioeconomic level; everyone is the same in the city.”

“Stepping foot in New York as a fresh transplant is like being swallowed up whole and then regurgitated. You’re stunned by the endless opportunity and the big mystery of the city. As the years pass, New York is filled with landmarks of my own memory and history–of friends made, lost, jobs hired and fired. It becomes a geographical time capsule.”

“The most important lesson I’ve learned about living in the city longterm is, we are all responsible for our own attitudes. Being a New Yorker doesn’t mean we need to live up to the ‘get out of my way’ stereotype. Unless you’re in Times Square; in which case, do what you have to do to survive.”

“New York City, to me, is like denim. The most universal fabric there is. Pristine and stiff at first, but after a decade of living here, I’ve grown to know its character, its strength, its charm, and its resilience. This city has become as familiar as a pair of beloved blue jeans that’s frayed at the hems and patched at the seams—perfectly imperfect and I wouldn’t have it any other way.”