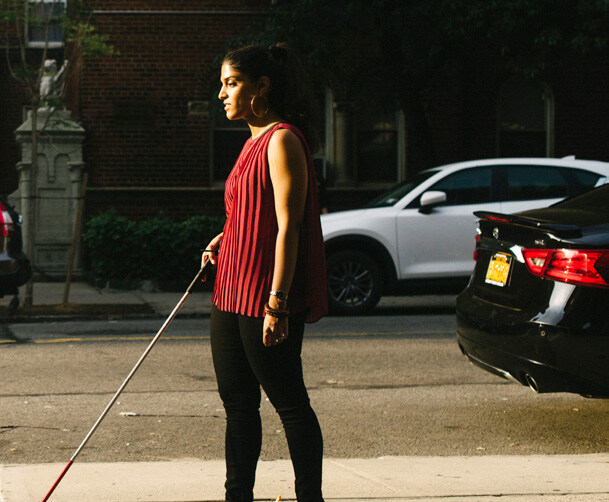 Josh: We get dressed for ourselves. Everything else that comes from it, whether it’s attention or a compliment, that is a gift with purchase. You don’t buy that oven because of the omelette pan, but I’ll take the omelette pan, and I’ll use it.

Gemma: For the most part, people are very positive, very “Go you!” but every so often you’ll get the mean girls or people who have negative things to say.

Josh: I love being in public with Gemma. We can go get french fries from McDonald’s, I don’t care. By myself, there’s a weird dynamic, it’s kind of like me against the world. When it’s us together, we’re the army, we’re the parade. We have permit from the city. You can’t stop us.

Josh: I came across a photo of Gemma outside of the White Castle in Bushwick. I love the idea of looking beautiful and sparkly like a princess, and then putting it in front of the White Castle. I never usually DM people I don’t know, but I was like “I need to write to her because we need to be friends.”

Gemma: So we met at this gay bar in Manhattan. I had just rediscovered early 90s Madonna and I was obsessed. We walked into the bar and they were playing Madonna, and I was like “It’s a sign! We’re meant to be.” That was one of the best days I’ve had in New York.

Josh: It wasn’t until I was living in New York that I felt the pressure to identify my style. I grew up on a dirt road in the middle of nowhere. I had no neighbors, I never thought “What am I doing stylewise?” I just sort of indulged. Once in a while I would stumble upon a fashion blog or magazine and think, “Oh, that’s what that style is called?” Gemma inspired me to go bigger with fashion. I was like, “Gemma would do it, so I’m going to do it.” Confidence, pass it on.

Gemma: I came to New York for the first time when I was 14. I was here for the St. Patrick’s Day Parade. It was completely outrageous. I came back from that trip and I was enchanted with New York. At that time Sex And The City and Friends came out. This idea of New York had me sold, coupled with an amazing experience. I was like, “I need to live there.” I was never going to be happy until I made that happen.

What neighborhood do you live in? Williamsburg, Brooklyn.

Best thing about living there? The waterfront is right outside my building. It makes life feel less claustrophobic.

Favorite street to stroll? For me, all roads lead to Wooster Street, and to the Moschino store, which is my favorite place to shop. It’s the epitome of fun fashion. Everything is larger than life and everyone is welcomed by the staff, regardless of what’s inside their wallet.

Favorite bar and restaurant? Fred’s at Barney’s Downtown. It feels sophisticated and special without being pretentious.

Hidden gem? There’s a vintage clothing store In Williamsburg called Le Grand Strip. Everything in there is a showstopper dripping in personality, including the owner and the staff. I adore them.

How to be(come) a New Yorker? Everyone seems to have a magic number of years or a specific set of experiences that they use as criteria to determine who is a “real” New Yorker. I keep it a bit more simple: if you want to become a New Yorker, move to New York. And don’t behave like a tourist.

What neighborhood do you live in? Bushwick, Brooklyn.

Best thing about living there? After a few years of living there, it’s a bit like Cheers. Everybody knows my name; or at least, they recognize me because of my hair! People say “hello” when they see me, which is always nice and as a home away from home. Also, I live really close to House Of Yes and love seeing everyone lined up outside in all of their fantastical looks as they wait to go into events. New Yorkers turn it up for a night out, especially for a theme night.

Favorite neighborhood? Fort Greene. I love the tree-lined streets of brownstones close to the park. It feels much more relaxed in comparison to other neighborhoods and the bonus is there are so many dogs to creep on!

Why? I love the feeling of getting off the train and walking down to No Relation Vintage, which is always the starting point for my shopping adventures.

Favorite restaurant? Gemma at The Bowery Hotel. Not only because it shares the same name as me, but also because between the atmosphere, decor, and incredible food, it caters to every expectation I ever had about dining out in an old school Italian restaurant (inspired by a mild-medium obsession with mafia films). When I go here I really feel like I’m in New York.

Hidden gem? I think, given the sheer volume of people in NYC, there are so few “undiscovered” places. For me it isn’t a place, it’s the unexpected moments of kindness that occur amongst the intense hustle and bustle. A little boy called Andrew who was with his mum stopped to give my Pikachu boots a hug on the street across from White Castle, just after Josh and I had finished our shoot for this issue. It was so sweet. He gave Josh a hug, too!

How to be(come) a New Yorker? I’ve read several articles on the topic of “You know you’re a New Yorker when…” Common examples are when you’ve cried openly on public transport, when you’ve seen a human take a dump in front of you, etc. I feel it’s a mindset over and above everything else. It’s about being resilient and having an attitude of “I’ll do what I want,” in a positive sense, not an arrogant sense-without the influence of others.

Your New York soundtrack? Definitely has to be ‘Salsation’ by David Shire from the Saturday Night Fever soundtrack. I love this film because it portrays the gritty, darker side to New York life (albeit in a different era). Before I moved to New York, I’d fantasize about the glamorous scenarios in which I’d find myself when I got here and in my head, this was always the song playing in the background.

Gemma: I think in New York people definitely celebrate uniqueness, but they’re also ready to tell you whether they like it or not. Whether you want to hear it or not.

Gemma: I don’t speak Italian, but I do speak Moschino!

Josh: You play the comparison game here all the time. “Why don’t I have that?” I would tell anyone coming here to lower their expectations. And if you have a problem with jealousy, you should reconsider. You have to be really comfortable with yourself.

Gemma I think New York did a really good job on its PR. People told me, “It’s going to be really hard.” But somehow you think that it’s going to be different for you and you’re going to get this chance that will precipitate your journey.

Josh: We know inherently that we’re not supposed to judge a book by its cover, and yet people come to New York and they don’t realize that the postcard of the Empire State Building or Times Square does not accurately capture the New York experience. It doesn’t even capture the Times Square experience, because that postcard is so pretty. If someone were coming to visit I would tell them.

Josh: I always feel pressure to get people what we call a real New York experience.

Josh: Not something necessarily off the beaten path, just something...

Both: Not Times Square!

Josh: The taller the buildings, the longer the shadows. Once you’re comfortable in New York, you start having fun with the dark. The shadows are fun-you start venturing out to those non-postcard type places.