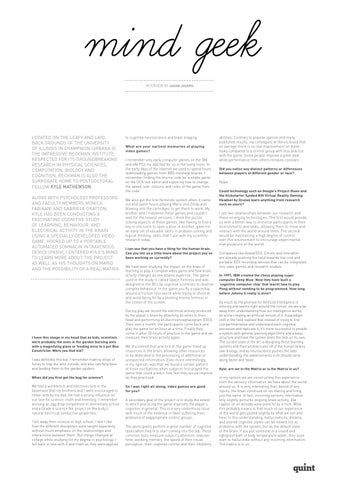 LOCATED ON THE LEAFY AND LAIDBACK GROUNDS OF THE UNIVERSITY OF ILLINOIS IN CHAMPAIGN-URBANA IS THE IMPRESSIVE BECKMAN INSTITUTE. RESPECTED FOR ITS GROUNDBREAKING RESEARCH IN PHYSICAL SCIENCES, COMPUTATION, BIOLOGY AND COGNITION, BECKMAN IS ALSO THE SURROGATE HOME TO POSTDOCTORAL FELLOW KYLE MATHEWSON. ALONG WITH PSYCHOLOGY PROFESSORS AND FACULTY MEMBERS MONICA FABIAANI AND GABRIELE GRATTON, KYLE HAS BEEN CONDUCTING A FASCINATING COGNITIVE STUDY OF LEARNING, BEHAVIOUR, AND ELECTRICAL ACTIVITY IN THE BRAIN USING A SPECIALLY DEVELOPED VIDEO GAME. HOOKED UP TO A PORTABLE AUTOMATED SOMNACIN INTRAVENOUS DEVICE (PASIV), I ENTERED KYLE’S MIND TO LEARN MORE ABOUT THE PROJECT AS WELL AS HIS THOUGHTS ON MARIO AND THE POSSIBILITY OF A REAL MATRIX.

I have this image in my head that as kids, scientists were probably the ones in the garden burning ants with a magnifying glass or feeding mice to a pet Boa Constrictor. Were you that kid? I was definitely this kid. I remember making strips of honey to trap the ants outside, and also catching bees and feeding them to the garden spiders. When did you first get the bug for science? We had a workbench and electronic kits in the basement that my brothers and I were encouraged to tinker with by my dad. He had a strong influence on our love for science, math and inventing. I remember winning an egg drop competition in elementary school and a Grade 6 science fair project on the body’s natural electrical conduction properties. I fell away from science in high school. I don’t like how the different disciplines were taught separately without much emphasis on the relationships and interactions between them. But things changed at college while studying for my degree in psychology. I fell back in love with it and math as they were applied

to cognitive neuroscience and brain imaging. What are your earliest memories of playing video games? I remember very early computer games on the 386 and 486 PCs my dad had for us in the living room. In the early days of the internet we used to spend hours downloading games from BBS message boards. I remember finding the source code for a snake game on the DOS text editor and exploring how to change the speed, size, colours, and rules of the game from the code. We also got the first Nintendo system when it came out and spent hours playing Mario and Zelda and blowing into the cartridges to get them to work. My brother and I mastered these games and couldn’t wait for the newest versions. I think the puzzle solving aspects of these games, like having to find a key in one room to open a door in another, gave me an early set of valuable skills in problem solving and logical thinking, skills that I use with my scientific research today. I can see that you have a thing for the human brain. Can you tell us a little more about the project you’ve been working on currently? We have been studying the impact on the brain of learning to play a complex video game and how brain activity changes as one attains expertise. The game used in the study is called Space Fortress and was designed in the 80’s by cognitive scientists to observe complex behaviour. In the game you fly a spaceship around a friction-less world while trying to shoot at and avoid being hit by a pivoting enemy fortress in the center of the screen. During play we record the electrical activity produced by the player’s brain by attaching 64 wires to their head and performing an electroencephalogram (EEG). Then over a month, the participants come back and play the game for an hour at a time. Finally they come in after 20 hours of practice in the game and we measure their brain activity again. We discovered that practice at the game freed up resources in the brain, allowing other resources to be dedicated to the processing of additional or unexpected information. Even more interestingly, in my opinion, was that we found a certain pattern of brain oscillations when subjects first played the game that could predict how fast they would improve as they practiced. So I was right all along, video games are good for you? A secondary goal of the project is to study the extent to which practicing the game improves the player’s cognition in general. This is a very contentious issue with much of the evidence in favor suffering from problems of inappropriate control groups. The participants perform a great number of cognitive tasks when they first start coming into the lab. These common tests measure subject’s attention, reaction time, working memory, the speed of their visual perception, their cognitive control and their inhibitory

abilities. Contrary to popular opinion and many published results, my colleagues at Illinois found that on average there is no real improvement on these tasks compared to a control group with less practice with the game. Some people improve a great deal while performance from others remains constant. Did you notice any distinct patterns or differences between players of different gender or race? Nope. Could technology such as Google’s Project Glass and the Kickstarter funded Rift Virtual Reality Gaming Headset by Oculus learn anything from research such as yours? I see two relationships between our research and these emerging technologies. The first would provide us with a better way to immerse participants in their environments and tasks, allowing them to move and interact with the world around them. The second would be maintaining a high degree of control over this environment to encourage experimental manipulations of the world. Companies like AvatarEEG, Emotiv and InteraXon are already pushing the field towards low cost and portable EEG recording devices that can be integrated into video games and research studies. In 1997, IBM created the chess playing super computer Deep Blue. Now they have built a ‘cognitive computer chip’ that learnt how to play Pong without needing to be programmed. How long before Johnny 5 really is alive? As much as the promise for Artificial Intelligence is enticing and seems right around the corner, we are a far away from understanding how our intelligence works, let alone creating an artificial version of it. A paradigm shift in the field realised that instead of trying to first compartmentalise and understand each cognitive processes and replicate it, it’s more successful to provide a system with general learning algorithms and a basic structure and have the system learn the task on its own. The current state of the art is designing these learning systems and their architectures off of the human brains own biology, and as neuroscience pushes the later understanding, the advancements in AI should come along faster and faster. Kyle, are we in the Matrix or is the Matrix in us? In my opinion we are constructing this experience from the sensory information we have about the world around us. It is very interesting that, devoid of any inputs, the brain continues on oscillating and firing just the same. In fact, incoming sensory information only slightly perturbs ongoing brain activity, like ripples on an already wavy pond hit by a rock. What this probably means is that much of our experience of the world gets pulled slightly by what we see and hear. In this understanding, hallucinations, dreams, and altered cognitive states can be viewed not as problems with the system, but as the default state of the brain. If you put someone in a sound and lightproof bath of body temperature water, they soon start to hallucinate without any incoming information. The matrix is in us. 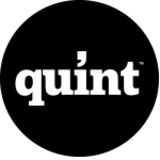 The eighteenth issue of quint magazine.

The eighteenth issue of quint magazine.