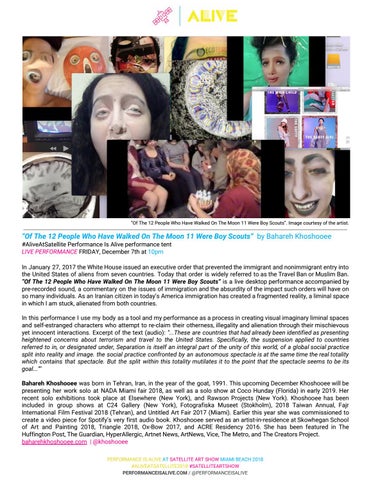 “Of The 12 People Who Have Walked On The Moon 11 Were Boy Scouts”. Image courtesy of the artist.

“Of The 12 People Who Have Walked On The Moon 11 Were Boy Scouts”​ b ​ y Bahareh Khoshooee #AliveAtSatellite Performance Is Alive performance tent LIVE PERFORMANCE​ FRIDAY, December 7th at ​10pm

In January 27, 2017 the White House issued an executive order that prevented the immigrant and nonimmigrant entry into the United States of aliens from seven countries. Today that order is widely referred to as the Travel Ban or Muslim Ban. “Of The 12 People Who Have Walked On The Moon 11 Were Boy Scouts” is a live desktop performance accompanied by pre-recorded sound, a commentary on the issues of immigration and the absurdity of the impact such orders will have on so many individuals. As an Iranian citizen in today’s America immigration has created a fragmented reality, a liminal space in which I am stuck, alienated from both countries. In this performance I use my body as a tool and my performance as a process in creating visual imaginary liminal spaces and self-estranged characters who attempt to re-claim their otherness, illegality and alienation through their mischievous yet innocent interactions. Excerpt of the text (audio): ​&quot;...These are countries that had already been identified as presenting heightened concerns about terrorism and travel to the United States. Specifically, the suspension applied to countries referred to in, or designated under, Separation is itself an integral part of the unity of this world, of a global social practice split into reality and image. the social practice confronted by an autonomous spectacle is at the same time the real totality which contains that spectacle. But the split within this totality mutilates it to the point that the spectacle seems to be its goal...&quot;​&quot; Bahareh Khoshooee ​was born in Tehran, Iran, in the year of the goat, 1991. This upcoming December Khoshooee will be presenting her work solo at NADA Miami fair 2018, as well as a solo show at Coco Hunday (Florida) in early 2019. Her recent solo exhibitions took place at Elsewhere (New York), and Rawson Projects (New York). Khoshooee has been included in group shows at C24 Gallery (New York), Fotografiska Museet (Stokholm), 2018 Taiwan Annual, Fajr International Film Festival 2018 (Tehran), and Untitled Art Fair 2017 (Miami). Earlier this year she was commissioned to create a video piece for Spotify’s very first audio book. Khoshooee served as an artist-in-residence at Skowhegan School of Art and Painting 2018, Triangle 2018, Ox-Bow 2017, and ACRE Residency 2016. She has been featured in The Huffington Post, The Guardian, HyperAllergic, Artnet News, ArtNews, Vice, The Metro, and The Creators Project. baharehkhoshooee.com​ | @khoshooee PERFORMANCE IS ALIVE​ A ​ T​ S ​ ATELLITE ART SHOW M ​ IAMI BEACH 2018 #ALIVEATSATELLITE2018​ # ​ SATELLITEARTSHOW PERFORMANCEISALIVE.COM​ / @PERFORMANCEISALIVE

Performance Is Alive has partnered once again with Satellite Art Show to present Miami’s only non-stop performance art program during Miami Art Week. Alive At Satellite features live and video based performance art projects from over 20 artists across the globe. The 4-day performance program celebrates SATELLITE’s mission to honor the significant impact of performance art - an often underrepresented medium during contemporary art fairs. 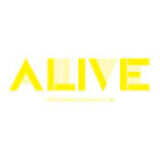