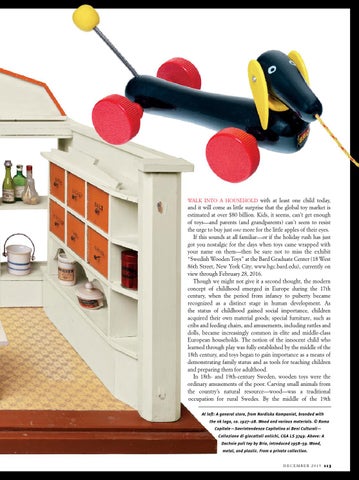 WALK INTO A HOUSEHOLD with at least one child today,

and it will come as little surprise that the global toy market is estimated at over $80 billion. Kids, it seems, can’t get enough of toys—and parents (and grandparents) can’t seem to resist the urge to buy just one more for the little apples of their eyes. If this sounds at all familiar—or if the holiday rush has just got you nostalgic for the days when toys came wrapped with your name on them—then be sure not to miss the exhibit “Swedish Wooden Toys” at the Bard Graduate Center (18 West 86th Street, New York City; www.bgc.bard.edu), currently on view through February 28, 2016. Though we might not give it a second thought, the modern concept of childhood emerged in Europe during the 17th century, when the period from infancy to puberty became recognized as a distinct stage in human development. As the status of childhood gained social importance, children acquired their own material goods; special furniture, such as cribs and feeding chairs, and amusements, including rattles and dolls, became increasingly common in elite and middle-class European households. The notion of the innocent child who learned through play was fully established by the middle of the 18th century, and toys began to gain importance as a means of demonstrating family status and as tools for teaching children and preparing them for adulthood. In 18th- and 19th-century Sweden, wooden toys were the ordinary amusements of the poor. Carving small animals from the country’s natural resource—wood—was a traditional occupation for rural Swedes. By the middle of the 19th At left: A general store, from Nordiska Kompaniet, branded with the nk logo, ca. 1927–28. Wood and various materials. © Roma Capitale—Sovrintendenza Capitolina ai Beni Culturali— Collezione di giocattoli antichi, CGA LS 3749. Above: A Dachsie pull toy by Brio, introduced 1958–59. Wood, metal, and plastic. From a private collection. DECEMBER 2015 113