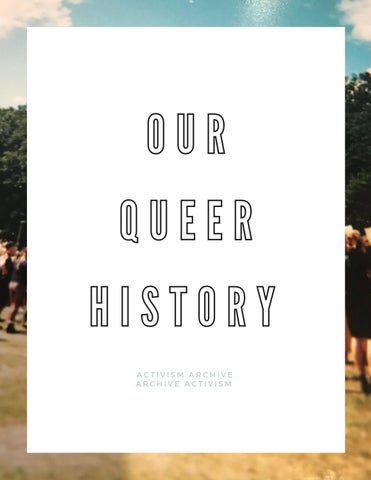 WHAT IS &#39;OUR QUEER HISTORY&#39;? Our Queer History is a youth-led project which looked at different ways to explore the queer history of Brighton and Hove. This resource is a way to capture those conversations and experiences. The project ran over 8 sessions. Each session was a drop in, with some people attend all and some only attending a few sessions. We felt it was important for people to be able to contribute in ways that were accessible for them. The pages here record some of our thoughts and conversations over the eight weeks, and we hope they are helpful in demonstrating the thoughts, interests and concerns of young people in regards to our queer identities and histories. The pages have been grouped into the key themes we discussed.

QUEER STORIES One week we heard from author Kuchenga, who read some of her work to us. The writing focused on exploring trans-identities and the impacts of colonialism in queer communities in the UK and beyond. It also spoke about the ways that writing and literature can shape our histories and our understandings of our identities. In response to this we reflected on the fact that very often the people writing queer history not queer people. After listening to kuchenga share some of her work we reflected on if we were the people writing queer histories, or our own queer history, what would we want it to be called? What would we want the story to be?

&#39;I like the idea of reframing the emergence of nonbinary identities .... the idea of gender as work&#39;

&#39;the idea that we are always still moving towards creating a better understanding of how queer history is told and recorded&#39;

PRIDE IN BRIGHTON What does Pride look like to you?

We looked at the history of Brighton Pride. The first Pride in Brighton was led by the Gay Liberation Front in the early 1970s. The next big wave of activism began in the 1980s and was focused on protesting Section 28. From there Pride grew into the large scale, international event we recognise today. 2010 was the first time that there was a fee for admission to the park. To reflect on how we relate to this history, and what Pride looks like to us we spent some time looking through stock photos of Brighton Pride. These photos have been taken and collected over lots of years and are in some ways an archive of their own, telling a story of what people think Pride in Brighton looks like. We picked and spoke about pictures that did, and did not, look like Pride to us. Below are some of our suggestions and comments.

Proud to be me!

One particpant of oru group picked this image out because this why they go to pride. To be proud of their identity. They related to the message that is being held up, but also the idea of pride as a protest, and an active event where we tell people we are proud of who we are!

Pride is for everyone

One group member selected this picture, as it spoke to what they hope that Pride is like, which is inclusive of everyone, but also multigenerational. We do not know if there are family members in this picture, but we hoped that maybe there was and a parent had come along to support their queer child!

PRIDE IN BRIGHTON What doesn&#39;t Pride look like to you?

One particpant picked this image out, commenting on how seeing

somehow exclusive, or British and that wasn&#39;t the values of queerness. We reflected on what it means to experience pride in Brighton if you aren&#39;t from the UK, but are governed by its laws, policies and practices. Sometimes as a queer person this is better, but sometimes it is worse.

Several of us picked out pictures of the police at Pride. Some of us raised how the police have often, and still aren&#39;t always, allies of LGBTQ+ communities especially for people of colour, Seeing pictures of them at pride made some of us uncomfortable. We wondered why it was there were so many stock photos of the police at pride. Why do people want these photos? What do they mean to say about pride by using photos of the police? On the other hand, one of our group raised how when they were younger they were only allowed to go to Pride because the police were there. In 2015 there had been a bomb scare, and as it is now such a big event, with so many people, this person&#39;s parents only felt comfortable letting them go because there would be a police presence.

We were struck by the appearance of barriers and fences in the images. They made us think about who is , and isn&#39;t welcome at Pride. One attendee, reflecting on this and on the histry that the Pride event in Preston Park used to be free to attend, said how they were unable to attend Pride because they and their friends couldn&#39;t afford it. Pride was for those that could afford the tickets.

We thought about queer spaces and places in several ways At the start of the project, some of the group attended an LGBTQ+ history walking tour with a local guide. We learnt specifically about the queer history of Brighton from the 1700s all the way up to the present day. The image above is the route that we walked. We learnt lots of new things about local queer history, for example, that Middle Street used to be the centre of gay nightlife in the 60s and 70s and that there was a three-storey club for queer women there!

The 11-16 group, led by artist Eva Louisa Jonas, led an activity that encouraged the young people to think about the spaces and places which feel safe to them. Below are some of the descriptions of their safe spaces.

QUEER OBJECTS AND THINGS What goes in a museum and why? What is local history? The possessions of Tommie and Betty were found after they died, and are now on display in Brighton museum. Their possessions include wrapping paper, a camera, and a photo album of their lives together. We looked at think about how we collect queer objects and things and how museums should them. We thought about the objects we would like to see included in an archive of queer history in Brighton and Hove and curated our &#39;Museums of Me&#39; with objects we would like to see in a museum of local queer history.

&#39;This is a picture of my big denim jacket with lots of different badges ... I like badges because they are easy to take on and off if you need to , depending on the situation and who you are with&#39;

&#39; In my display is Mr Gingerbread and a copy of one of my Harry Potter books ... I think the struggle at home and still coming out the other side to do something good is something I can relate to&#39;

As part of our Queer Objects and Things discussion, we looked at an LGBTQ+ museum trail made by Brighton Museum in 2015. Whilst as a group we thought it was a good thing that people were recognising the queer history of objects and their creators, we also wondered what it meant to approach queer history in this way, by picking out the queer stories already in a collection. Members of the group raised questions about whether this was very inclusive, as the type of people likely to already be included in a museum collection are more likely to be from certain, privileged groups. The group also considered that these objects might not also be reflective of local history, or history that feels local and recognisable to people, because the people included are all famous or well-known, and not necessarily part of Brighton&#39;s specific LGBTQ+ history. One group member raised the idea that queer history is expansive it doesn&#39;t just exist in one object or person but is made up of lots of different, normal, and extraordinary people. To tell a more accurate story of LGBTQ+ history we need to acknowledge how it is based on community and many different stories. We also discussed how often in conversations about queer history, young people are not often consulted or their stories told, specifically, and that is even more important as the ways that young queer people continue to change and evolve over time.

Funded by Reverberate, a Shout Out Loud initiative in partnership with Sound Connections, to support grassroots,

Our Queer History is a youth-led project which looked at different ways to explore the queer history of Brighton and Hove. This resource is a way to capture those conversations and experiences. 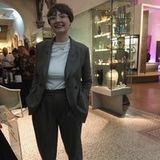