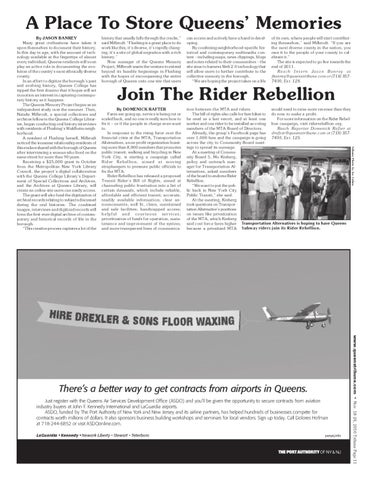 A Place To Store Queens’ Memories history that usually falls through the cracks,” said Milbrodt. “Flushing is a great place to do work like this; it’s diverse, it’s rapidly changing; it’s a site of global migration with a rich history.” Now manager of the Queens Memory Project, Milbrodt wants the venture to extend beyond its humble beginnings in Flushing with the hopes of encompassing the entire borough of Queens onto one site that users

can access and actively have a hand in developing. By combining neighborhood-specific historical and contemporary multimedia content – including maps, news clippings, blogs and notes related to their communities – the site aims to harness Web 2.0 technology that will allow users to further contribute to the collective memory in the borough. “We are hoping the project takes on a life

of its own, where people will start contributing themselves,” said Milbrodt. “If you are the most diverse county in the nation, you owe it to the people of your county to celebrate it.” The site is expected to go live towards the end of 2011. Reach Intern Jason Banrey at jbanrey@queenstribune.com or (718) 3577400, Ext. 128.

Join The Rider Rebellion By DOMENICK RAFTER Fares are going up, service is being cut or scaled back, and no one is really sure how to fix it – or if the people in charge even want to. In response to the rising furor over the financial crisis at the MTA, Transportation Alternatives, a non-profit organization boasting more than 8,000 members that promotes public transit, walking and bicycling in New York City, is starting a campaign called Rider Rebellion, aimed at moving straphangers to pressure public officials to fix the MTA. Rider Rebellion has released a proposed Transit Rider’s Bill of Rights, aimed at channeling public frustration into a list of certain demands, which include reliable, affordable and efficient transit; accurate, readily available information; clear announcements; well lit, clean, maintained and safe facilities; handicapped access; helpful and courteous services; prioritization of funds for operation, maintenance and improvement of the system; and more transparent lines of communica-

tion between the MTA and riders. would need to raise more revenue than they The bill of rights also calls for fare hikes to do now to make a profit. be used as a last resort, and at least one For more information on the Rider Rebelworker and one rider to be installed as voting lion campaign, visit riderrebellion.org. members of the MTA Board of Directors. Reach Reporter Domenick Rafter at Already, the group’s Facebook page has drafter@queenstribune.com or (718) 357over 1,000 fans and the campaign is going 7400, Ext. 125. across the city to Community Board meetings to spread its message. At a meeting of Community Board 5, Mo Kinberg, policy and outreach manager for Transportation Alternatives, asked members of the board to endorse Rider Rebellion. “We want to put the public back in New York City Public Transit,” she said. At the meeting, Kinberg took questions on Transportation Alternative’s positions on issues like privatization of the MTA, which Kinberg said cost force fares higher Transportation Alternatives is hoping to have Queens because a privatized MTA Subway riders join its Rider Rebellion.

Just register with the Queens Air Services Development Ofﬁce (ASDO) and you’ll be given the opportunity to secure contracts from aviation industry buyers at John F. Kennedy International and LaGuardia airports. ASDO, funded by The Port Authority of New York and New Jersey and its airline partners, has helped hundreds of businesses compete for contracts worth millions of dollars. It also sponsors business building workshops and seminars for local vendors. Sign up today. Call Dolores Hofman at 718-244-6852 or visit ASDOonline.com. -B(VBSEJBt,FOOFEZt/FXBSL-JCFSUZt4UFXBSUt5FUFSCPSP

There’s a better way to get contracts from airports in Queens.

By JASON BANREY Many great civilizations have taken it upon themselves to document their history. In this day in age, with the amount of technology available at the fingertips of almost every individual, Queens residents will soon play an active role in documenting the evolution of the country’s most ethnically diverse county. In an effort to digitize the borough’s past and evolving history, Queens College has tipped the first domino that it hopes will set in motion an interest in capturing contemporary history as it happens. The Queens Memory Project began as an independent study over the summer. Then, Natalie Milbrodt, a special collections and archives fellow in the Queens College Libraries, began conducting oral history interviews with residents of Flushing’s Waldheim neighborhood. A resident of Flushing herself, Milbrodt noticed the immense relationship residents of this enclave shared with the borough of Queens after interviewing a woman who lived on the same street for more than 90 years. Receiving a $25,000 grant in October from the Metropolitan New York Library Council, the project’s digital collaboration with the Queens College Library’s Department of Special Collections and Archives, and the Archives at Queens Library, will create an online site users can easily access. The grant will also fund the digitization of archival records relating to subjects discussed during the oral histories. The combined images, interviews and digitized records will form the first-ever digital archive of contemporary and historical records of life in the borough. “This creative process captures a lot of the