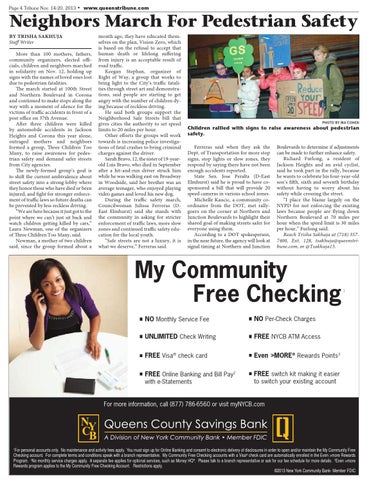 By Trisha sakhuja Staff Writer More than 100 mothers, fathers, community organizers, elected officials, children and neighbors marched in solidarity on Nov. 12, holding up signs with the names of loved ones lost due to pedestrian fatalities. The march started at 100th Street and Northern Boulevard in Corona and continued to make stops along the way with a moment of silence for the victims of traffic accidents in front of a post office on 37th Avenue. After three children were killed by automobile accidents in Jackson Heights and Corona this year alone, outraged mothers and neighbors formed a group, Three Children Too Many, to raise awareness for pedestrian safety and demand safer streets from City agencies. The newly-formed group’s goal is to shift the current ambivalence about street safety into a strong lobby where they honor those who have died or been injured, and fight for stronger enforcement of traffic laws so future deaths can be prevented by less reckless driving. “We are here because it just got to the point where we can’t just sit back and watch children getting killed by cars,” Laura Newman, one of the organizers of Three Children Too Many, said. Newman, a mother of two children said, since the group formed about a

month ago, they have educated themselves on the plan, Vision Zero, which is based on the refusal to accept that human death or lifelong suffering from injury is an acceptable result of road traffic. Keegan Stephan, organizer of Right of Way, a group that works to bring light to the City’s traffic fatalities through street art and demonstrations, said people are starting to get angry with the number of children dying because of reckless driving. He said both groups support the Neighborhood Safe Streets bill that gives cities the authority to set speed limits to 20 miles per hour. Other efforts the groups will work towards is increasing police investigations of fatal crashes to bring criminal charges against the driver. Sarah Bravo, 12, the sister of 19-yearold Luis Bravo, who died in September after a hit-and-run driver struck him while he was walking east on Broadway in Woodside, said her brother was an average teenager, who enjoyed playing video games and loved his new dog. During the traffic safety march, Councilwoman Julissa Ferreras (DEast Elmhurst) said she stands with the community in asking for stricter enforcement of traffic laws, more slow zones and continued traffic safety education for the local youth. “Safe streets are not a luxury, it is what we deserve,” Ferreras said.

Children rallied with signs to raise awareness about pedestrian safety.

Ferreras said when they ask the Dept. of Transportation for more stop signs, stop lights or slow zones, they respond by saying there have not been enough accidents reported. State Sen. Jose Peralta (D-East Elmhurst) said he is proud to have cosponsored a bill that will provide 20 speed cameras in various school zones. Michelle Kaucic, a community coordinator from the DOT, met rallygoers on the corner at Northern and Junction Boulevards to highlight their shared goal of making streets safer for everyone using them. According to a DOT spokesperson, in the near future, the agency will look at signal timing at Northern and Junction

Boulevards to determine if adjustments can be made to further enhance safety. Richard Furlong, a resident of Jackson Heights and an avid cyclist, said he took part in the rally, because he wants to celebrate his four-year-old son’s fifth, sixth and seventh birthday without having to worry about his safety while crossing the street. “I place the blame largely on the NYPD for not enforcing the existing laws because people are flying down Northern Boulevard at 70 miles per hour when the speed limit is 30 miles per hour,” Furlong said. Reach Trisha Sakhuja at (718) 3577400, Ext. 128, tsakhuja@queenstribune.com, or @Tsakhuja13.

1 For personal accounts only. No maintenance and activity fees apply. You must sign up for Online Banking and consent to electronic delivery of disclosures in order to open and/or maintain the My Community Free Checking account. For complete terms and conditions speak with a branch representative. My Community Free Checking accounts with a Visa® check card are automatically enrolled in the Even &gt;more Rewards Program. 2No monthly service charges apply. A separate fee applies for optional services, such as Money HQ®. Please talk to a branch representative or ask for our fee schedule for more details. 3Even &gt;more Rewards program applies to the My Community Free Checking Account. Restrictions apply. ©2013 New York Community Bank- Member FDIC