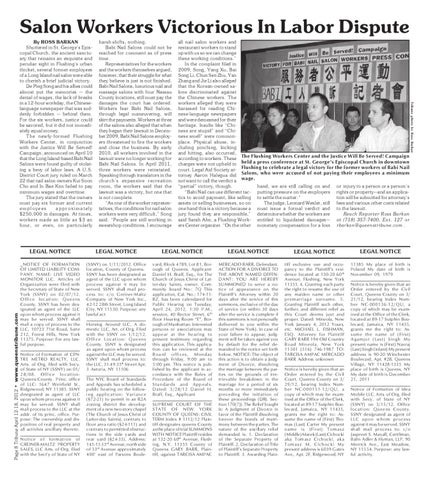 harsh shifts, nothing. Babi Nail Salons could not be reached for comment as of press time. Representatives for the workers and the workers themselves argued, however, that their struggle for what they believe is just is not finished. Babi Nail Salons, luxurious nail and massage salons with four Nassau County locations, still must pay the damages the court has ordered. Workers fear Babi Nail Salons, through legal maneuvering, will skirt the payments. Workers at three of the salons also alleged that when they began their lawsuit in December 2009, Babi Nail Salons employers threatened to fire the workers and close the business. By early 2010, all workers involved in the lawsuit were no longer working for Babi Nail Salons. In April 2011, three workers were reinstated. Speaking through translators in the church’s expansive recreation room, the workers said that the lawsuit was a victory, but one that is not complete. “As one of the worker representatives, the conditions for nail salon workers were very difficult,” Song said. “People are still working in sweatshop conditions. I encourage

all nail salon workers and restaurant workers to stand up with us so we can change these working conditions.” In the complaint filed in 2009, Song, Yang Xu, Bai Song Li, Chun Sen Zhu, Yan Zhang and Jie Li also alleged that the Korean-owned salons discriminated against the Chinese workers. The workers alleged they were harassed for reading Chinese-language newspapers and were demeaned for their heritage. Insults like “Chinese are stupid” and “Chinese smell” were commonplace. Physical abuse, including pinching, kicking and hitting, also occurred, according to workers. These The Flushing Workers Center and the Justice Will Be Served! Campaign charges were not upheld in held a press conference at St. George’s Episcopal Church in downtown court. Legal Aid Society at- Flushing to celebrate a legal victory for the former workers of Babi Nail torney Aaron Halegua did Salons, who were accused of not paying their employees a minimum not want to call the verdict a wage. hand, we are still calling on and or injury to a person or a person’s “partial” victory, though. “Babi Nail can use different tac- putting pressure on the employers rights or property—and an application will be submitted for attorney’s tics to avoid payment, like selling to settle the matter.” The judge, Leonard Wexler, still fees and various other costs related assets or selling businesses, so on one hand this is a victory because a must issue a formal verdict and to the lawsuit. Reach Reporter Ross Barkan jury found they are responsible,” determine whether the workers are said Sarah Ahn, a Flushing Work- entitled to liquidated damages— at (718) 357-7400, Ext. 127 or ers Center organizer. “On the other monetary compensation for a loss rbarkan@queenstribune.com .

vard, Block 4789, Lot 81, Borough of Queens. Applicant: Daniel H. Braff, Esq., for The Church of Jesus Christ of Latter-day Saints, owner. Community board No.: 7Q This application, Cal. No.: 174-11BZ, has been calendared for Public Hearing on Tuesday, April 24, 2012, 1:30 P.M., session, 40 Rector Street, 6th floor Hearing Room “E”, Borough of Manhattan. Interested persons or associations may appear at the hearing to present testimony regarding this application. This application can be reviewed at the Board offices, Monday through Friday, 9:00 am to 5:00 pm. This notice is published by the applicant in accordance with the Rules of Procedure of the Board of Standards and Appeals. Dated: 3/28/12 Daniel H. Braff, Esq., Applicant _________________________________ SUPREME COURT OF THE STATE OF NEW YORK COUNTY OF QUEENS: CIVIL TERM Index # 1112/12 Plaintiff designates queens County as the place of trial SUMMONS WITH NOTICE Plaintiff resides at 132-20 60th Avenue, Flushing, N.Y. 11355 County of Queens GARY BARR, Plaintiff, -against- TARCISA AMPAC

MERCADO BARR, Defendant. ACTION FOR A DIVORCE TO THE ABOVE NAMED DEFENDANT: YOU ARE HEREBY SUMMONED to serve a notice of appearance on the Plaintiff’s Attorney within 20 days after the service of this summons, exclusive of the day of service (or within 30 days after the service is complete if this summons is not personally delivered to you within the State of New York). In case of your failure to appear, judgment will be taken against you by default for the relief demanded in the notice set forth below. NOTICE: The object of this action is to obtain a Judgment of Divorce, dissolving the marriage between the parties on the grounds of irretrievable breakdown in the marriage for a period of six months or more immediately preceding the initiation of these proceedings (DRL Section 170(7)). The Relief Sought Is: A Judgment of Divorce in favor of the Plaintiff dissolving forever the bonds of matrimony between the parties. The nature of the ancillary relief demanded is: 1. Declaration of the Separate Property of Plaintiff. 2. Declaration of Title of Plaintiff’s Separate Property to Plaintiff. 3. Awarding Plain-

By ROSS BARKAN Shuttered in St. George’s Episcopal Church, the ancient sanctuary that remains an exquisite and peculiar sight in Flushing’s urban thicket, several former employees of a Long Island nail salon were able to cherish a brief judicial victory. De Ping Song and his allies could almost put the memories — the denial of wages, the lack of breaks in a 12-hour workday, the Chineselanguage newspaper that was suddenly forbidden — behind them. For the six workers, justice could be savored, but it did not immediately equal money. The newly-formed Flushing Workers Center, in conjunction with the Justice Will Be Served! Campaign, announced on April 10 that the Long Island-based Babi Nail Salons were found guilty of violating a bevy of labor laws. A U.S. District Court jury ruled on March 22 that nail salon owners Kui Soon Cho and In Bae Kim failed to pay minimum wages and overtime. The jury stated that the owners must pay six former and current employees approximately $250,000 in damages. At times, workers made as little as $3 an hour, or even, on particularly