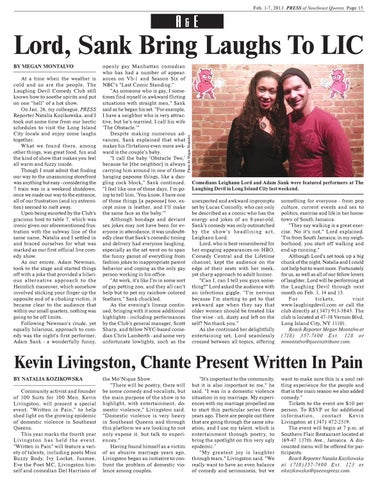 BY MEGAN MONTALVO At a time when the weather is cold and so are the people, The Laughing Devil Comedy Club still knows how to soothe spirits and put on one “hell” of a hot show. On Jan. 26, my colleague, PRESS Reporter Natalia Kozikowska, and I took out some time from our hectic schedules to visit the Long Island City locale and enjoy some laughs together. What we found there, among other things, was great food, fun and the kind of show that makes you feel all warm and fuzzy inside. Though I must admit that finding our way to the unassuming storefront was anything but easy - considering the 7 train was in a weekend shutdown, once we made our way to the entrance, all of our frustration (and icy extremities) seemed to melt away. Upon being escorted by the Club&#39;s gracious host to table 7, which was ironic given our aforementioned frustration with the subway line of the same name, Natalia and I settled in and braced ourselves for what was marked as our first official live comedy show. As our emcee, Adam Newman, took to the stage and started things off with a joke that provided a hilarious alternative approach to the Heimlich maneuver, which somehow involved sticking your finger up the opposite end of a choking victim, it became clear to the audience that within our small quarters, nothing was going to be off limits. Following Newman&#39;s crude, yet equally hilarious, approach to comedy was the night&#39;s first performer, Adam Sank - a wonderfully funny,

openly gay Manhattan comedian who has had a number of appearances on Vh-1 and Season Six of NBC&#39;s &quot;Last Comic Standing.&quot; &quot;As someone who is gay, I sometimes find myself in awkward flirting situations with straight men,&quot; Sank said as he began his set. &quot;For example, I have a neighbor who is very attractive, but he&#39;s married. I call his wife &#39;The Obstacle.&#39;&quot; Despite making numerous advances, Sank explained that what makes his flirtations even more awkward is the couple&#39;s baby. &quot;I call the baby &#39;Obstacle Two,&#39; because he [the neighbor] is always carrying him around in one of those hanging papoose things, like a dangling cock block,&quot; Sank continued. &quot;I feel like one of these days, I&#39;m going to tell him, &#39;You know, I have one of those things [a papoose] too, except mine is leather, and I&#39;ll make the same face as the baby.&#39;&quot; Although bondage and deviant sex jokes may not have been for everyone in attendance, it was undoubtedly clear that Sank&#39;s comedic timing and delivery had everyone laughing, especially as the set went on to span the funny gamut of everything from fashion jokes to inappropriate parent behavior and coping as the only gay person working in his office. &quot;At work, it&#39;s like I&#39;m in some sort of gay petting zoo, and they all can&#39;t help but to pet my rainbow colored feathers,&quot; Sank chuckled. As the evening&#39;s lineup continued, bringing with it some additional highlights - including performances by the Club&#39;s general manager, Scott Sharp, and fellow NYC-based comedian Chris Lamberth - and some very unfortunate lowlights, such as the

Comedians Leighann Lord and Adam Sank were featured performers at The Laughing Devil in Long Island City last weekend. unexpected and awkward impromptu set by Lucas Connolly, who can only be described as a comic who has the energy and jokes of an 8-year-old, Sank&#39;s comedy was only outmatched by the show&#39;s headlining act, Leighann Lord. Lord, who is best remembered for her engaging appearances on HBO, Comedy Central and the Lifetime channel, kept the audience on the edge of their seats with her meek, yet sharp approach to adult humor. &quot;Can I, can I tell you guys something?&quot; Lord asked the audience with an infectious giggle. &quot;I&#39;m nervous because I&#39;m starting to get to that awkward age when they say that older women should be treated like fine wine - uh, dusty and left on the self? No thank you.&quot; As she continued her delightfully entertaining set, Lord seamlessly crossed between all topics, offering

something for everyone - from pop culture, current events and sex to politics, exercise and life in her hometown of South Jamaica. &quot;They say walking is a great exercise. No it&#39;s not,&quot; Lord explained. &quot;I&#39;m from South Jamaica; in my neighborhood, you start off walking and end up running.&quot; Although Lord&#39;s set took up a big chunk of the night, Natalia and I could not help but to want more. Fortunately for us, as well as all of our fellow lovers of laughter, Lord will be performing at the Laughing Devil through next month on Feb. 3, 14 and 15. For tickets, visit www.laughingdevil.com or call the club directly at (347) 913-3845. The club is located at 47-38 Vernon Blvd, Long Island City, NY 11101. Reach Reporter Megan Montalvo at (718) 357-7400 Ext. 128 or mmontalvo@queenstribune.com.

Kevin Livingston, Chante Present Written In Pain BY NATALIA KOZIKOWSKA Community activist and founder of 100 Suits for 100 Men, Kevin Livingston, will present a special event, &quot;Written in Pain,&quot; to help shed light on the growing epidemic of domestic violence in Southeast Queens. This year marks the fourth year Livingston has held the event. &quot;Written in Pain&quot; will feature a variety of talents, including poets Miss Buzzy Body, Ivy Locket, Jusmee, Eve the Poet MC, Livingston himself and comedian Del Harrison of

the Mo&#39;Nique Show. &quot;There will be poetry, there will be some comedy and vocalists, but the main purpose of the show is to highlight, with entertainment, domestic violence,&quot; Livingston said. &quot;Domestic violence is very heavy in Southeast Queens and through this platform we are looking to not only expose it, but talk to experiences.&quot; Having found himself as a victim of an abusive marriage years ago, Livingston began an initiative to confront the problem of domestic violence among couples.

&quot;It&#39;s important to the community, but it is also important to me,&quot; he said. &quot;I was in a domestic violence situation in my marriage. My experiences with my marriage propelled me to start this particular series three years ago. There are people out there that are going through the same situation, and I use my talent, which is entertainment through poetry, to bring the spotlight on this very ugly epidemic.” &quot;My greatest joy is laughter through tears,&quot; Livingston said. &quot;We really want to have an even balance of comedy and seriousness, but we

want to make sure this is a soul rattling experience for the people and that is the main reason we also added comedy.&quot; Tickets to the event are $10 per person. To RSVP or for additional information, contact Kevin Livingston at (347) 472-2519. The event will begin at 7 p.m. at Southern Flair Restaurant located at 169-47 137th Ave., Jamaica. A discounted menu will be offered for participants. Reach Reporter Natalia Kozikowska at (718)357-7400 Ext. 123 or nkozikowska@queenspress.com.