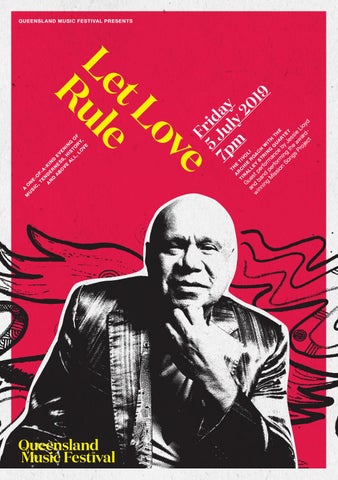 Welcome Message Since his arrival on the Australian music scene 30 years ago, Archie Roach has been using his music to inspire, educate and heal. Despite being a child of the stolen generation, Uncle Archieâ&#x20AC;&#x2122;s heart radiates beauty and joy and his music exemplifies forgiveness and reconciliation. He is a teacher, a truth seeker and a beacon of love and I can think of no one more perfect to open our 20th anniversary Queensland Music Festival tonight. In 2019, the year of Voice-Treaty-Truth, I invite you to learn from a true master and walk away from tonight with an enriched outlook for our future. I also urge you to read the Uluru Statement From The Heart, and to ruminate upon the Makarrata aspirations. Together weâ&#x20AC;&#x2122;ll make a beautiful shared future for our country - when we let love rule. A huge heartfelt thanks to our incredible Queensland Music Festival Let Love Rule team led by Erica and Gabby, our beautiful artists Archie, Sally, Bruce, Adam, Lerida, Justin and Patrick of Tinalley String Quartet, Jessie, Emma, Candice, Kristel, Ed, Deline, Judy and Rob and our wonderful string arranger Dr Stephen Newcomb.

Acknowledgements Queensland Music Festival would like to acknowledge the Traditional Owners and Custodians of the lands on which Queensland Music Festival events are taking place, and pay our respects to Elders past, present and emerging. Aboriginal and Torres Strait Islander people should be aware that this concert may make reference to or contain images of deceased persons which may cause sadness or distress. PATRON His Excellency the Honourable Paul de Jersey AC Governor of Queensland. BOARD OF DIRECTORS Dominic McGann Chair Danielle Duell Deputy Chair Darren Busine Treasurer BOARD MEMBERS Diat Alferink Prof Margaret Barrett Alison Mobbs Jim Reeves Jane Williams John Willsteed

Featured Biographies ARCHIE ROACH Australian singer/songwriter Archie Roach emerged in the early ‘90s fusing a folkinspired sound with traditions from his Indigenous heritage. His ARIA-winning debut album, Charcoal Lane, was named one of Rolling Stone Magazine’s Top 50 albums of 1992. It was centred around Roach’s heartbreaking “Took the Child Away,” a deeply affecting ballad about his experience as one of the “Stolen Generation” of Aboriginal children who were taken from their parents and placed in non-Indigenous households. The song resonated throughout the country and received a Human Rights Achievement Award, marking the first time that the honour had been bestowed upon a songwriter. Over the coming decades, Roach and his long time musical and life partner, Ruby Hunter, would establish themselves as leading lights of Australian folk and Aboriginal music. Archie Roach survived a turbulent upbringing to become a powerful voice for Indigenous Australians, and a nationally popular and respected recording artist.

TINALLEY STRING QUARTET Now in its 15th year, the Tinalley String Quartet was awarded the Grand Prize of the 2005 Australian Chamber Music Competition and captured the world’s attention in 2007 when it was awarded First Prize at the prestigious 9th Banff International String Quartet Competition. The Quartet has performed throughout Australia, Europe, Canada and United States, appearing in such prestigious venues as the Vienna Musikverein, Berlin Konzerthaus, Amsterdam Concertgebouw, Bremen Die Glocke, Frankfurt Alte Oper and the Sydney Opera House. International highlights have included performances in New York, Paris, London, Toronto, Vancouver, San Francisco and San Diego. The Quartet remains the only Australian ensemble to have been presented in the preeminent Berlin Konzerthaus International String Quartet Series and the Jeunesse Musik Erleben Series at the Musikverein.

JESSIE LLOYD Originally from the tropics of North Queensland, Jessie Lloyd is an Aboriginal and Torres Strait Islander musician who performs a broad collection of Australian Indigenous songs. A vocalist, guitarist, bassist and ukulele player, Jessie earned her formal qualifications at Abmusic in Perth, WA in 2002. Heralding from a musical family, her grandfather Albie Geia was the conductor of the Palm Island Brass Band and her father, Joe Geia, is considered a pioneer of contemporary Indigenous music and composer of the Aboriginal National Anthem ‘Yil Lull’. A musician, producer and creative entrepreneur, Jessie Lloyd is a cultural practitioner of Indigenous music and is dedicated to the continuation of song traditions. Her mission is to produce, perform and progress Australian Indigenous music through innovative concepts, collaborative projects and cultural practice. Maintaining an authenticity that contributes to the rich diversity of Australian arts and its audiences, and working towards positive and progressive social opportunities, values and attitudes.

MISSION SONGS PROJECT Jessie Lloyd’s profoundly moving Mission Songs Project reveals what daily life was like for Indigenous Australians on Christian missions and state-run settlements. Through the discovery of rare secular songs that were sung after church, audiences can gain a deeper understanding about the history of elders, families and communities, from cultural identity to love and loss. Searching for the secular songs that were sung after church, Mission Songs Project looks to explore the day to day life of the mission days, from cultural identity to love and loss. These unique songs consist of almost forgotten stories that can now shed light into the history of our Indigenous elders, families and communities. Mission Songs Project faithfully explores the musical journey of Indigenous Australian music as Jessie Lloyd connects the traditional with contemporary, revealing the continuation of cultural practice and song traditions into the 21st Century. 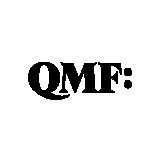