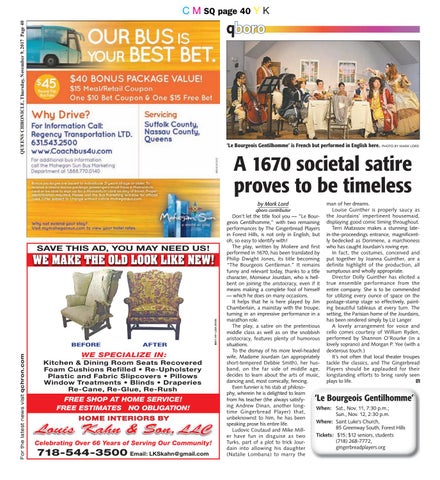 ‘Le Bourgeois Gentilhomme’ is French but performed in English here.

SAVE THIS AD, YOU MAY NEED US!

man of her dreams. Louise Guinther is properly saucy as the Jourdains’ impertinent housemaid, displaying good comic timing throughout. Terri Matassov makes a stunning latein-the-proceedings entrance, magnificently bedecked as Dorimene, a marchioness who has caught Jourdain’s roving eye. In fact, the costumes, conceived and put together by Joanna Guinther, are a definite highlight of the production, all sumptuous and wholly appropriate. Director Dolly Guinther has elicited a true ensemble performance from the entire company. She is to be commended for utilizing every ounce of space on the postage-stamp stage so effectively, painting beautiful tableaus at every turn. The setting, the Parisian home of the Jourdains, has been rendered simply by Liz Langer. A lovely arrangement for voice and cello comes courtesy of William Ryden, performed by Shannon O’Rourke (in a lovely soprano) and Morgan P. Yee (with a dexterous touch.) It’s not often that local theater troupes tackle the classics, and The Gingerbread Players should be applauded for their longstanding efforts to bring rarely seen Q plays to life.

Don’t let the title fool you — ”Le Bourgeois Gentilhomme,” with two remaining performances by The Gingerbread Players in Forest Hills, is not only in English, but oh, so easy to identify with! The play, written by Moliere and first performed in 1670, has been translated by Philip Dwight Jones, its title becoming “The Bourgeois Gentleman.” It remains funny and relevant today, thanks to a title character, Monsieur Jourdain, who is hellbent on joining the aristocracy, even if it means making a complete fool of himself — which he does on many occasions. It helps that he is here played by Jim Chamberlain, a mainstay with the troupe, turning in an impressive performance in a marathon role. The play, a satire on the pretentious middle class as well as on the snobbish aristocracy, features plenty of humorous situations. To the dismay of his more level-headed wife, Madame Jourdain (an appropriately short-tempered Debbie Smith), her husband, on the far side of middle age, decides to learn about the arts of music, dancing and, most comically, fencing. Even funnier is his stab at philosophy, wherein he is delighted to learn from his teacher (the always satisfying Andrew Dinan, another longWhen: time Gingerbread Player) that, unbeknownst to him, he has been Where: speaking prose his entire life. Ludovic Coutaud and Mike MillTickets: er have fun in disguise as two Turks, part of a plot to trick Jourdain into allowing his daughter (Natalie Lombana) to marry the 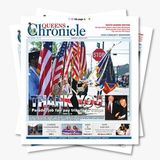