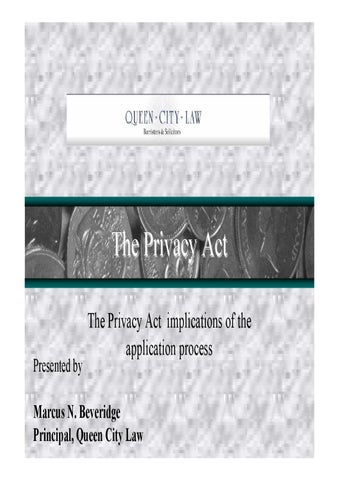 Main purposes the promotion and protection of individual privacy

The Act affects almost everyone in New Zealand including the credit provider.

With few exceptions it applies across the public and private sectors

Concerned with good personal information handling practices The Privacy Act gives the Privacy Commissioner the power to issue codes of practice that become part of the law.

Exemptions from the Act • The Act only protects the personal information. It, therefore, does not cover: – The judicial actions of a court or tribunal – The news media when they are engaging in news activities – MPs acting in their official capacity – Matters that are only or mostly to do with personal/household/family affairs – Complaints about use of information about a company, rather than a person

Application to the Bank • A bank may give a banker's reference (e.g. A/C number or Customer number) about a customer, but in doing so will be bound to comply with the Privacy Act 1993. • While there is no code of practice for the disclosure, the business of banking and the giving of references by banks will be subject to Principles 10 and 11 of that Act. • A breach of Principle 10 or 11 does not confer a legal right that is enforceable in a Court of law • However, the breach will be subject of a complaint to the Privacy Commissioner – If not settled, the Director of Human Rights Proceedings may refer it to the Human Rights Review Tribunal

Continue… • By being the party, the bank undertakes: – A strict duty of confidence concerning the affairs of their customers and former customers – To observe and apply the Privacy Act 1993 – To require all of their employees, contractors, and agents to sign a declaration of secrecy – To use its endeavour to ensure that their customer information is accurate – To act responsibly in the use of direct marketing, having regard to the customer and the nature of the marketing material – To inform customers of the disclosure unless prohibited by law

Fact: The Couple tried to open a joint account and the customer told the couple that she would "get it checked" and carried out a credit check on them both – The bank declined as the result was not favourable. – During the credit check process the couple’s personal information was released to the Debt Collection Services and the couple was soon contacted by the Debt Collection Services at their workplace Issue: Any authorisation to carry out the credit check? Outcome: The bank did not appear to have obtained any authorisation to carry out the credit check. Held that the failure to object amounted to an authorisation. Not necessary to release other personal information to the debt collection agency. – The complaint was settled by a payment to the couple by the bank.

• Fact: Two members of a man’s family entered into a finance contract in his name to buy a car. – The loan was defaulted and it was lodged against the man’s credit file. – The family members made a statutory declaration stating that they had used the man’s identity to secure finance. • Issue: Principle 8 apply? • Outcome: The finance company agreed to contact the credit reporting agency and have the default removed from the man’s file. – But the finance company reserved the right to pursue criminal action against the family members who committed the fraud in relation to the complainant’s identity.

Fact: A bank granted a mortgage loan to a client on the condition that she secure employment. – But she had to leave the job because of her health problem. The employer then spoke with the bank and, at its request, faxed a letter saying that the client was no longer a member of the employer's staff. – The client asked the bank for access to that letter. The bank refused the request under ss 29(1)(a) and (b) of the Privacy Act. Issue: Breach of Principle 6? Outcome: The employer's letter did not indicate any reliance on confidentiality and stated that the information had been supplied to ensure that the employer would not be involved in a misrepresentation to the bank concerning the client's employment. The officer did not consider that releasing this kind of information would deter people from supplying information in similar circumstances. – The Privacy Officer did not consider that the bank had a proper basis to withhold the letter from the client. The bank subsequently released it.

Fact: A man’s proposed purchase was cancelled because of the incorrect credit record held by a credit reporting agency. The man's lawyer wrote to a credit reporting agency in 1995, advising them that a debt noted against the man's credit report did not relate to him and asking for it to be corrected. Neither the man nor the lawyer received any response from the credit reporting agency . – His mortgage application was declined on the basis of a credit report obtained from the credit reporting agency, which showed a number of outstanding debts against the man. – This was eventually corrected by the man. However, the agreement was failed as he was not able to satisfy his finance condition. He ultimately purchased the property, but first had to renegotiate to do so and the price increased substantially in that time. Issue: Whether the the credit reporting agency had taken reasonable steps to ensure that, having regard to the purposes for which it was to be used, the information was accurate? (in relation to Principle 8) Outcome: The errors in loading the debts, together with the failure to address the man's concerns when he drew the errors to the agency's attention, combined to suggest that reasonable steps had not been taken to ensure the information was accurate before it was used. Held, that An action will be an interference with a person's privacy if it breaches an information privacy principle and causes some loss to the individual (section 66(1)(b)(i)) or results in significant humiliation or significant injury to the individual's feelings (section 66(1)(b)(iii)). – The complaint was settled after the credit reporting agency paid compensation to the man. 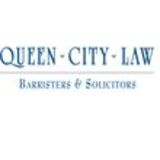