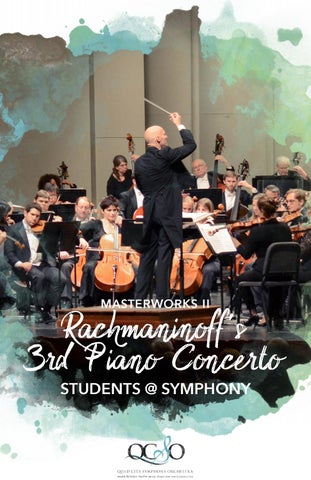 Take selfies with your friends before the concert, during intermission, and after the concert. Use the Masterworks II Snapchat Filter! Share your Experience using the Hashtags: #tagtheqc | #QCSO | #atsymphony | #rach3 Turn off your phone during the concert.

Welcome! On behalf of the Quad City Symphony Orchestra, I want to welcome you to Masterworks II: Rachmaninoffâ&#x20AC;&#x2122;s 3rd Piano Concerto! One of the things I can remember from when I began attending symphony orchestra performances was the multitude of sounds that ensemble can make. From the loudest louds, to the softest softs. This program will surely deliver those extremes, and everything in between. Take this evening as an opportunity to tune out the outside world and let the music take your imagination wherever it wants to go! I hope you have a wonderful time tonight, and Iâ&#x20AC;&#x2122;ll be looking out for all of you from the back row. Thanks!

*Out of respect for those fallen in service of our country, we ask that you do not applaud after the playing of the Star-Spangled Banner.

Notes on the Music MEET THE PIANIST Wei Luo Born in Shenzhen, China, Wei Luo began piano lessons at age 5, and gave her debut recital in Hong Kong at age 6. Winner of numerous competitions in China, Wei also claimed first prize in the 11th Chopin International Competition for Young Pianists in Poland and the 2nd Rachmaninov International Piano Competition for Young Pianists in Frankfurt, both in 2010. She made her orchestra debut with the Shanghai Philharmonic in 2010 with conductor Muhai Tang performing Prokofiev Concerto No. 3. Recent recital appearances include Sonoma State University, Herbst Hall presented by San Francisco Performances, Festival Napa Valley and the Santa Fe Chamber Music Festival, among others. Concerto performances include the Kansas City Symphony playing Prokofiev’s Concerto No. 3 and the Denver Philharmonic playing Mendelssohn’s Concerto in G minor. In August 2017 Wei made her debut in Avery Fisher Hall at the Mostly Mozart Festival playing a pre-concert recital. Exploring a depth of core repertoire, Wei has already performed major concertos of Rachmaninoff, Beethoven and Prokofiev, and recital repertoire of Bach, Schumann, Mussorgsky, Chopin, Ravel and Haydn. She has participated in masterclasses with Leon Fleisher, Richard Goode, Seymour Lipkin, Abbey Simon and Nelita True. In 2007 Wei entered the Shenzhen Arts school, studying with Kang Yongze. She went on to study at the elementary and middle schools of the Shanghai Conservatory of Music with Tang Zhe. In 2012 Wei was accepted to the prestigious Curtis Institute of Music where she currently studies with Gary Graffman and Robert McDonald. She was honored to be the artist selected to perform in the Dean’s Honors recital at Curtis in 2014. In 2018 Wei was named a Gilmore Young Artist. 6 MASTERWORKS II | NOVEMBER 2018

Symphony No. 104 in D Major (1795) This work is Franz Joseph Haydn’s final symphony, which he wrote during one of two visits to London requested and paid for by his patron Johann Peter Salomon. Haydn was a very famous composer and musician during his lifetime, and the premiere of this symphony was very successful. Haydn wrote in his diary after the performance, “The whole company was thoroughly pleased and so was I. I made 4,000 gulden ($2,083) on this evening: such a thing is possible only in England.”

Gulden is the historical German and Dutch term for gold coin. In today’s value, a Gulden would be worth $0.52.

Four Sea Interludes from Peter Grimes (1945) Four Sea Interludes is an orchestral suite comprised of instrumental passages from the opera Peter Grimes. Based on a poem by English writer George Crabbe, Peter Grimes tells the story of a fisherman who is accused of murdering his apprentice. In this piece, Britten draws upon his memories of growing up on the coast of the North Sea. Listen to see if you can hear the stillness of dawn, the bell tolls of a church on Sunday morning, the mystery of a moonlit night, and the crashing of the waves during a storm.

Piano Concerto No. 3 in D minor (1909) Composed in 1909, this piano concerto has the reputation of being one of the most technically challenging piano concerti in the standard repertoire. Feared by many pianists, Josef Hofmann (the pianist to whom the work is dedicated) never publicly performed the work saying the piece “wasn’t for him.” The piece takes the form of a standard three movement concerto. The movements follow a fast-slow-fast tempo scheme.

what high school did you graduate from? Elgin High School (1998), Elgin, Illinois

what is your favorite piece of music? Arpeggione Sonata by Schubert

what are you reading/ listening to right now?

LISTENING When I'm not singing The Wheels on the Bus or the ABC Song with my daughter, we're usually listening to Awolnation Radio. Red Hot Chili Peppers is my favorite band! READING Between You and Me by Allison Winn Scotch

what life advice would you give a student who is about to graduate high school?

There are so many things! I'm pretty sure I was smarter at 18 than I am today. I knew everything and had a set plan and vision for my life. Sometimes life has a different plan and that's ok. Don't get stuck on the what ifs or the future. Enjoy the now. 10 MASTERWORKS II | NOVEMBER 2018

what high school did you graduate from? Camelback High School (1980), Phoenix, Arizona

what activities were you involved in?

what is your favorite piece of music? The Bach Cello Suites

what are you reading/listening to right now?

READING The Secret of the Red Chambers by Cao Xueqin LISTENING I listen to a lot of music, especially pieces that I am considering programing with the QCSO. Currently, I have been listening to the Four Sea Interludes quite a bit, especially recordings with the composer conducting.

what did you imagine you would be doing today, when you were in high school?

At one point, I really wanted to be a Broadway star, but then I learned just how much dancing was involved and how far behind in the training I was! Believe it or not, I always wanted to be a conductor.

what life advice would you give a student who is about to graduate high school?

meet the pets Masterpets #1 is based off of our Principal Horn Marc Zyla and his partner Rachel Priceâ&#x20AC;&#x2122;s dogs Rocco and Dolly. If you would like your pets to be featured in a future Masterpets comic please send a photo and the names of your pets to: director of education & community engagement Marc Zyla Â&#x; mzyla@qcso.org