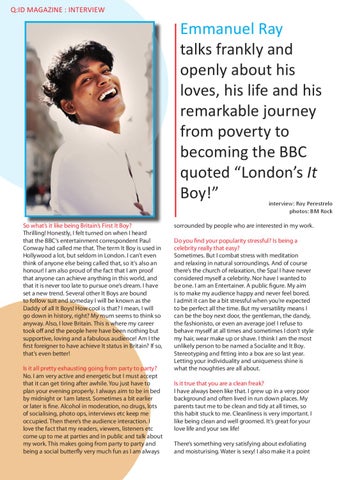 Emmanuel Ray talks frankly and openly about his loves, his life and his remarkable journey from poverty to becoming the BBC quoted “London’s It Boy!”

So what’s it like being Britain’s First It Boy? Thrilling! Honestly, I felt turned on when I heard that the BBC’s entertainment correspondent Paul Conway had called me that. The term It Boy is used in Hollywood a lot, but seldom in London. I can’t even think of anyone else being called that, so it’s also an honour! I am also proud of the fact that I am proof that anyone can achieve anything in this world, and that it is never too late to pursue one’s dream. I have set a new trend. Several other It Boys are bound to follow suit and someday I will be known as the Daddy of all It Boys! How cool is that? I mean, I will go down in history, right? My mum seems to think so anyway. Also, I love Britain. This is where my career took off and the people here have been nothing but supportive, loving and a fabulous audience! Am I the first foreigner to have achieve It status in Britain? If so, that’s even better! Is it all pretty exhausting going from party to party? No. I am very active and energetic but I must accept that it can get tiring after awhile. You just have to plan your evening properly. I always aim to be in bed by midnight or 1am latest. Sometimes a bit earlier or later is fine. Alcohol in moderation, no drugs, lots of socialising, photo ops, interviews etc keep me occupied. Then there’s the audience interaction. I love the fact that my readers, viewers, listeners etc come up to me at parties and in public and talk about my work. This makes going from party to party and being a social butterfly very much fun as I am always

sorrounded by people who are interested in my work. Do you find your popularity stressful? Is being a celebrity really that easy? Sometimes. But I combat stress with meditation and relaxing in natural sorroundings. And of course there’s the church of relaxation, the Spa! I have never considered myself a celebrity. Nor have I wanted to be one. I am an Entertainer. A public figure. My aim is to make my audience happy and never feel bored. I admit it can be a bit stressful when you’re expected to be perfect all the time. But my versatility means I can be the boy next door, the gentleman, the dandy, the fashionisto, or even an average joe! I refuse to behave myself at all times and sometimes I don’t style my hair, wear make up or shave. I think I am the most unlikely person to be named a Socialite and It Boy. Stereotyping and fitting into a box are so last year. Letting your individuality and uniqueness shine is what the noughties are all about. Is it true that you are a clean freak? I have always been like that. I grew up in a very poor background and often lived in run down places. My parents taut me to be clean and tidy at all times, so this habit stuck to me. Cleanliness is very important. I like being clean and well groomed. It’s great for your love life and your sex life! There’s something very satisfying about exfoliating and moisturising. Water is sexy! I also make it a point 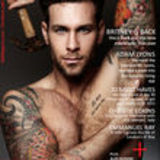 Issue 5 of the music and lifestyle magazine

Issue 5 of the music and lifestyle magazine