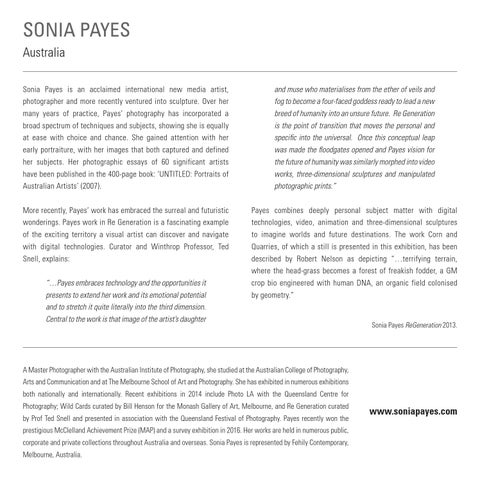 SONIA PAYES Australia Sonia Payes is an acclaimed international new media artist, photographer and more recently ventured into sculpture. Over her many years of practice, Payes’ photography has incorporated a broad spectrum of techniques and subjects, showing she is equally at ease with choice and chance. She gained attention with her early portraiture, with her images that both captured and defined her subjects. Her photographic essays of 60 significant artists have been published in the 400-page book: ‘UNTITLED: Portraits of Australian Artists’ (2007).

and muse who materialises from the ether of veils and fog to become a four-faced goddess ready to lead a new breed of humanity into an unsure future. Re Generation is the point of transition that moves the personal and specific into the universal. Once this conceptual leap was made the floodgates opened and Payes vision for the future of humanity was similarly morphed into video works, three-dimensional sculptures and manipulated photographic prints.”

More recently, Payes’ work has embraced the surreal and futuristic wonderings. Payes work in Re Generation is a fascinating example of the exciting territory a visual artist can discover and navigate with digital technologies. Curator and Winthrop Professor, Ted Snell, explains:

Payes combines deeply personal subject matter with digital technologies, video, animation and three-dimensional sculptures to imagine worlds and future destinations. The work Corn and Quarries, of which a still is presented in this exhibition, has been described by Robert Nelson as depicting “…terrifying terrain, where the head-grass becomes a forest of freakish fodder, a GM crop bio engineered with human DNA, an organic field colonised by geometry.”

“…Payes embraces technology and the opportunities it presents to extend her work and its emotional potential and to stretch it quite literally into the third dimension. Central to the work is that image of the artist’s daughter

A Master Photographer with the Australian Institute of Photography, she studied at the Australian College of Photography, Arts and Communication and at The Melbourne School of Art and Photography. She has exhibited in numerous exhibitions both nationally and internationally. Recent exhibitions in 2014 include Photo LA with the Queensland Centre for Photography; Wild Cards curated by Bill Henson for the Monash Gallery of Art, Melbourne, and Re Generation curated by Prof Ted Snell and presented in association with the Queensland Festival of Photography. Payes recently won the prestigious McClelland Achievement Prize (MAP) and a survey exhibition in 2016. Her works are held in numerous public, corporate and private collections throughout Australia and overseas. Sonia Payes is represented by Fehily Contemporary, Melbourne, Australia.

The Emerging Curators Program is a proud initiative of the Queensland Centre for Photography (QCP) in response to government funding cuts, which resulted in the loss of our physical exhibition space. As sad as this is, every cloud has a silver lining and technology offers us a platform to continue promoting high quality photo media art. Through the Emerging Curators Program, emerging curators now have a space to curate exhibitions to an international audience. Each online publication will present a curated exhibition of two established international artists, two established Australian artists and two emerging Australian artists. To celebrate the first QCP Emerging Curators Program online exhibition, “Imaginarium” brings forth photo media work by artists who have used digital technology and post production techniques to create images which create imaginary worlds and explore inner realms. This showcase contemplates the potential that technology offers us to fully realise our imaginative