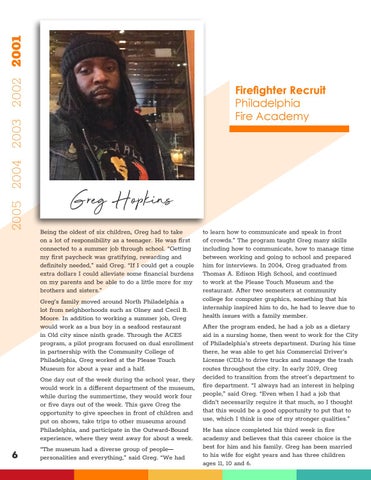 Greg Hopkins Being the oldest of six children, Greg had to take on a lot of responsibility as a teenager. He was first connected to a summer job through school. “Getting my first paycheck was gratifying, rewarding and definitely needed,” said Greg. “If I could get a couple extra dollars I could alleviate some financial burdens on my parents and be able to do a little more for my brothers and sisters.” Greg’s family moved around North Philadelphia a lot from neighborhoods such as Olney and Cecil B. Moore. In addition to working a summer job, Greg would work as a bus boy in a seafood restaurant in Old city since ninth grade. Through the ACES program, a pilot program focused on dual enrollment in partnership with the Community College of Philadelphia, Greg worked at the Please Touch Museum for about a year and a half. One day out of the week during the school year, they would work in a different department of the museum, while during the summertime, they would work four or five days out of the week. This gave Greg the opportunity to give speeches in front of children and put on shows, take trips to other museums around Philadelphia, and participate in the Outward-Bound experience, where they went away for about a week.

“The museum had a diverse group of people— personalities and everything,” said Greg. “We had

to learn how to communicate and speak in front of crowds.” The program taught Greg many skills including how to communicate, how to manage time between working and going to school and prepared him for interviews. In 2004, Greg graduated from Thomas A. Edison High School, and continued to work at the Please Touch Museum and the restaurant. After two semesters at community college for computer graphics, something that his internship inspired him to do, he had to leave due to health issues with a family member. After the program ended, he had a job as a dietary aid in a nursing home, then went to work for the City of Philadelphia’s streets department. During his time there, he was able to get his Commercial Driver’s License (CDL) to drive trucks and manage the trash routes throughout the city. In early 2019, Greg decided to transition from the street’s department to fire department. “I always had an interest in helping people,” said Greg. “Even when I had a job that didn’t necessarily require it that much, so I thought that this would be a good opportunity to put that to use, which I think is one of my stronger qualities.” He has since completed his third week in fire academy and believes that this career choice is the best for him and his family. Greg has been married to his wife for eight years and has three children ages 11, 10 and 6.