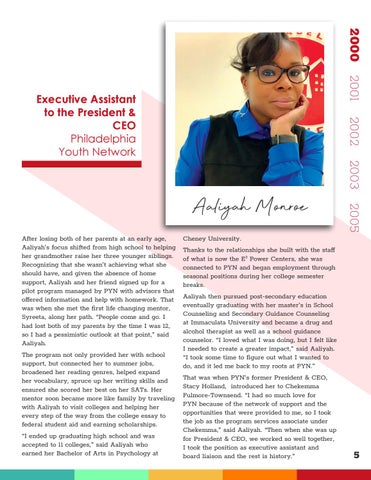 Aaliyah Monroe After losing both of her parents at an early age, Aaliyah’s focus shifted from high school to helping her grandmother raise her three younger siblings. Recognizing that she wasn’t achieving what she should have, and given the absence of home support, Aaliyah and her friend signed up for a pilot program managed by PYN with advisors that offered information and help with homework. That was when she met the first life changing mentor, Syreeta, along her path. “People come and go. I had lost both of my parents by the time I was 12, so I had a pessimistic outlook at that point,” said Aaliyah. The program not only provided her with school support, but connected her to summer jobs, broadened her reading genres, helped expand her vocabulary, spruce up her writing skills and ensured she scored her best on her SATs. Her mentor soon became more like family by traveling with Aaliyah to visit colleges and helping her every step of the way from the college essay to federal student aid and earning scholarships. “I ended up graduating high school and was accepted to 11 colleges,” said Aaliyah who earned her Bachelor of Arts in Psychology at

Cheney University. Thanks to the relationships she built with the staff of what is now the E3 Power Centers, she was connected to PYN and began employment through seasonal positions during her college semester breaks. Aaliyah then pursued post-secondary education eventually graduating with her master’s in School Counseling and Secondary Guidance Counseling at Immaculata University and became a drug and alcohol therapist as well as a school guidance counselor. “I loved what I was doing, but I felt like I needed to create a greater impact,” said Aaliyah. “I took some time to figure out what I wanted to do, and it led me back to my roots at PYN.” That was when PYN’s former President & CEO, Stacy Holland, introduced her to Chekemma Fulmore-Townsend. “I had so much love for PYN because of the network of support and the opportunities that were provided to me, so I took the job as the program services associate under Chekemma,” said Aaliyah. “Then when she was up for President & CEO, we worked so well together, I took the position as executive assistant and board liaison and the rest is history.”