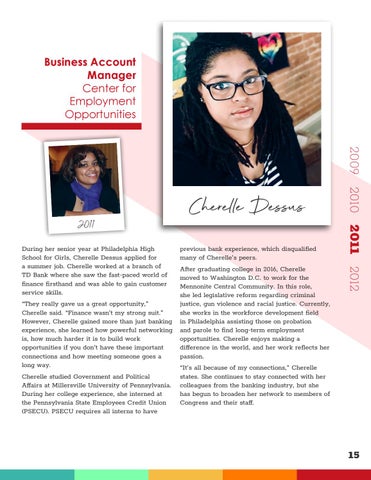 During her senior year at Philadelphia High School for Girls, Cherelle Dessus applied for a summer job. Cherelle worked at a branch of TD Bank where she saw the fast-paced world of finance firsthand and was able to gain customer service skills. “They really gave us a great opportunity,” Cherelle said. “Finance wasn’t my strong suit.” However, Cherelle gained more than just banking experience, she learned how powerful networking is, how much harder it is to build work opportunities if you don’t have these important connections and how meeting someone goes a long way. Cherelle studied Government and Political Affairs at Millersville University of Pennsylvania. During her college experience, she interned at the Pennsylvania State Employees Credit Union (PSECU). PSECU requires all interns to have

previous bank experience, which disqualified many of Cherelle’s peers. After graduating college in 2016, Cherelle moved to Washington D.C. to work for the Mennonite Central Community. In this role, she led legislative reform regarding criminal justice, gun violence and racial justice. Currently, she works in the workforce development field in Philadelphia assisting those on probation and parole to find long-term employment opportunities. Cherelle enjoys making a difference in the world, and her work reflects her passion.

“It’s all because of my connections,” Cherelle states. She continues to stay connected with her colleagues from the banking industry, but she has begun to broaden her network to members of Congress and their staff.