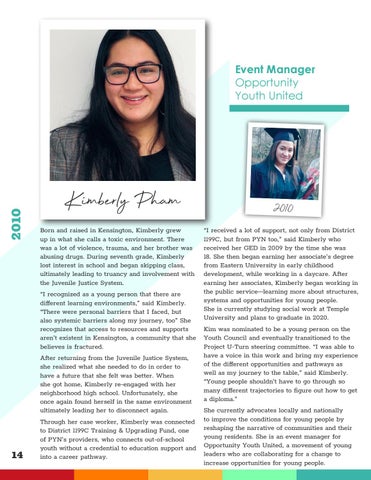 Kimberly Pham Born and raised in Kensington, Kimberly grew up in what she calls a toxic environment. There was a lot of violence, trauma, and her brother was abusing drugs. During seventh grade, Kimberly lost interest in school and began skipping class, ultimately leading to truancy and involvement with the Juvenile Justice System. “I recognized as a young person that there are different learning environments,” said Kimberly. “There were personal barriers that I faced, but also systemic barriers along my journey, too” She recognizes that access to resources and supports aren’t existent in Kensington, a community that she believes is fractured. After returning from the Juvenile Justice System, she realized what she needed to do in order to have a future that she felt was better. When she got home, Kimberly re-engaged with her neighborhood high school. Unfortunately, she once again found herself in the same environment ultimately leading her to disconnect again.

Through her case worker, Kimberly was connected to District 1199C Training & Upgrading Fund, one of PYN’s providers, who connects out-of-school youth without a credential to education support and into a career pathway.

2010 “I received a lot of support, not only from District 1199C, but from PYN too,” said Kimberly who received her GED in 2009 by the time she was 18. She then began earning her associate’s degree from Eastern University in early childhood development, while working in a daycare. After earning her associates, Kimberly began working in the public service—learning more about structures, systems and opportunities for young people. She is currently studying social work at Temple University and plans to graduate in 2020. Kim was nominated to be a young person on the Youth Council and eventually transitioned to the Project U-Turn steering committee. “I was able to have a voice in this work and bring my experience of the different opportunities and pathways as well as my journey to the table,” said Kimberly. “Young people shouldn’t have to go through so many different trajectories to figure out how to get a diploma.” She currently advocates locally and nationally to improve the conditions for young people by reshaping the narrative of communities and their young residents. She is an event manager for Opportunity Youth United, a movement of young leaders who are collaborating for a change to increase opportunities for young people.