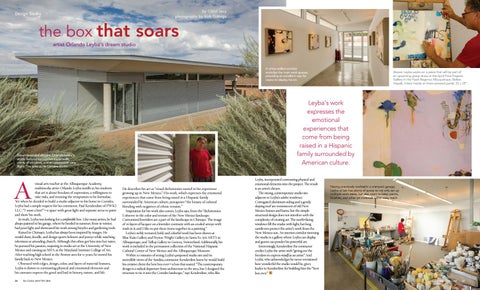 A white-walled corridor encircles the main work spaces, providing an excellent way for Leyba to display his art.

Leyba’s work expresses the emotional experiences that come from being raised in a Hispanic family surrounded by American culture.

visual arts teacher at the Albuquerque Academy, multimedia artist Orlando Leyba instills in his students that art is about freedom of expression, a willingness to take risks, and resisting the temptation to be formulaic. Yet when he decided to build a studio adjacent to his home in Corrales, Leyba had a simple request for his contractor, Paul Kenderdine of PWKI LLC: “I want a box!”—a space with great light and separate areas to paint and show his work. In truth, Leyba was looking for a comfortable box. Like many artists, he had always painted in his garage, where he broiled in summer, froze in winter, had poor light, and showcased his work among bicycles and gardening tools. Raised in Chimayó, Leyba has always been inspired by images. He would draw, doodle, and design sports helmets and jerseys while watching television or attending church. Although this often got him into hot water, he pursued his passion, majoring in studio art at the University of New Mexico and earning an MFA at the Maryland Institute College of Art. After teaching high school in the Boston area for 11 years, he moved his family back to New Mexico. Obsessed with edges, design, color, and layers of material features, Leyba is drawn to contrasting physical and emotional elements and his canvases express the good and bad in history, nature, and life. 26

Above: Leyba works on a piece that will be part of an upcoming group show at the April Price Projects Gallery in the Hyatt Regency Albuquerque. Below: Nopali, mixed media on linen-covered panel, 32 x 25&quot;.

He describes his art as “visual dichotomies rooted in his experience growing up in New Mexico.” His work, which expresses the emotional experiences that come from being raised in a Hispanic family surrounded by American culture, juxtaposes “the beauty of cultural blending with negatives of ethnic tension.” Inspiration for his work also comes, Leyba says, from the “dichotomies I observe in the color and texture of the New Mexico landscape. Customized lowriders are a part of the landscape in Chimayó. The image of 16 layers of lacquer on a lowrider contrasts with an eroded arroyo with trash in it, and I like to put these items together in a painting.” Leyba’s richly textured, bold, and colorful work has been shown at Blue Rain Gallery and Peyton Wright Gallery in Santa Fe, 516 ARTS in Albuquerque, and Tafkaj Gallery in Geneva, Switzerland. Additionally, his work is included in the permanent collection of the National Hispanic Cultural Center of New Mexico and the Albuquerque Museum. Within 10 minutes of seeing Leyba’s proposed studio site and its incredible views of the Sandias, contractor Kenderdine knew he would build his creative client the best box ever—a box that soared. “The contemporary design is a radical departure from architecture in the area, but I designed the structure to tie it into the Corrales landscape,” says Kenderdine, who, like

Leyba, incorporated contrasting physical and emotional elements into the project. The result is an artist’s dream. The strong, contemporary studio sits adjacent to Leyba’s adobe residence. Corrugated aluminum siding and a gently sloping roof are reminiscent of old New Mexico houses and barns, but the simple structural design does not interfere with the complexity of creating art. The north-facing windows fill the studio with light, but long cantilevers protect the artist’s work from the New Mexico sun. An interior corridor rimming the studio is a gallery where Leyba can display and guests can ponder his powerful art. Interestingly, Kenderdine the contractor credits Leyba the artist with “giving me the freedom to express myself as an artist.” And Leyba, who acknowledges he never envisioned how wonderful the studio would be, gives kudos to Kenderdine for building him the “best box ever.”