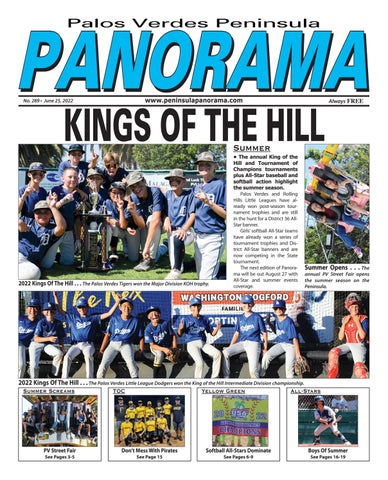 KINGS OF THE HILL

• The annual King of the Hill and Tournament of Champions tournaments plus All-Star baseball and softball action highlight the summer season. Palos Verdes and Rolling Hills Little Leagues have already won post-season tournament trophies and are still in the hunt for a District 36 AllStar banner. Girls’ softball All-Star teams have already won a series of tournament trophies and District All-Star banners and are now competing in the State tournament. The next edition of Panorama will be out August 27 with All-Star and summer events coverage.

PV Street Fair Opens Summer For The Hill • Peninsula kids officially opened summer with the annual “PV Teen Night” at the Palos Verdes Street Fair held at Peninsula Center. Young people from all over the Peninsula attended the ridesonly Friday night opening with friends old and new. As tradition has it, the &quot;Zipper&quot; ride produced the loudest screams of terror heard up and down Silver Spur Road. However the ride “Insomniac” also pulled out a few frightened screams. The annual event put together by the Chamber of Commerce included live music, animal shows, food, snacks, booths and exhibitions that attracted thousands of visitors during the weekend.

• Another Panorama publishing season is over and it’s time for a summer vacation - once baseball is over. The baseball season will end, eventually. All the sports seasons end on the Peninsula, even soccer, eventually. It might be a quick break, because there’s summer baseball and summer soccer with camps and scrimmages for all the other sports. However, baseball has one of the

longest and most intense seasons. Tryouts happen the first week of January and, after the teams draft, practice begins in February. Usually two games and two practices every week into June. And if you’re on All-Stars you could be playing into July. That’s a lot of time with the same kids and families going through the trials and tribulations of youth sports. Lasting friendships are made as well as a lot of personal growth for everyone. One of the things that happens to the old Panorama cameraman when he comes back shooting soccer in September is noticing how young ev-

eryone seems. The kids playing sports in September or not the same kids playing sports in May and June. September kids are little kids. June kids are big kids. They’ve grown. They’ve matured. They are ready for the next level - whatever level that may be. We here at Panorama are ready for a summer break. We’ve matured and grown up as well and are ready for the next level, which is carrying a set of golf clubs instead of a camera. The summer is playing golf with Timmy and breaking 80, once the baseball season is, eventually, over.

We publish 21 times during the calendar year every other Saturday unless otherwise noted.

On the Week of Publication: Editorial &amp; Advertising Space:

localnews@pvppanorama adsales@pvppanorama.com Publisher shall not be liable for errors or damages for errors in advertising except up to the actual cost of space occupied by the item appearing in error. Totally Cool Publishing L.L.C. reserves the right to approve or reject any and all copy and assumes no responsibility for errors not of its making. This newspaper cannot be responsible for the return of unsolicited news releases or photographs. Copyright Totally Cool Publishing 2022. All rights reserved.

Support A Local Business AND Connect with a Smart, Active and Passionate Audience

Various merchants, products and services were available to be seen at the PV Street Fair.

Solid Gold . . . Free entertainment was provided throughout the weekend.

Ayso.bluesombrero.com/region10 Early Bird Pricing Until July 1: 5U and 6U Always $125 For all other Divisions:

Please go to our website www.ayso10.com for more information and directions to register.

All three Peninsula All-Star teams will be adding to their trophy collections this summer while preparing to hang a number of District and State banners.

• All-Star teams from the Palos Verdes Peninsula Girls Softball League competed at the L.A./ South Bay “C” District tournament in Norwalk and brought home championship trophies. The 12U and 8U teams were District Champions and the 10U team was a District Finalist. All three Peninsula teams will compete at the “C” State Tournament in Lancaster next week. Before the District tournament, all three Peninsula All-Star teams competed in the All-Star Summer Classic Tournament in Fountain Valley. All three teams went undefeated and brought home the championship trophy in the Silver Division. The 8U All-Star team went 5-0, the 10U team went 6-0 and the 12U team went 5-0. — email reports

You Paid How Much For That Photo? 5x7 Photo Prints &amp; Downloads Only $7.99

Check Out The Photo Galleries And See The Latest Edition Of PANORAMA Online!

And So It Begins . . . The 8U All-Star team begins its tournament career by winning a sizable championship trophy.

The Local Gateway To All-Things Sports On The Peninsula

PVLL Sweeps KOH, RHLL Takes TOC Legends • The Palos Verdes Tigers and Dodgers capture the King of the Hill title while the Rolling Hills Tigers won the Tournament of Champions. The Tigers defeated the Silver Spur Braves in extra innings to capture the Major Division King of the Hill trophy last week at PV Little League. The Dodgers defeated the Rolling Hills Yankees to win the Intermediate King of the Hill championship at Rolling Hills Little League. The Rolling Hills Pirates finished the regular season in first place and capture the Major Division championship at the Tournament of Champions played at Perry Park in Redondo Beach. The Tournament of Champions goes back to the 1950’s and features league champions from all four Peninsula Little Leagues plus teams from Redondo Beach, Manhattan Beach, Hermosa Beach and El Segundo. Local players are now competing in the District 36 All-Star tournament. Check out the next edition of Panorama on August 27 for All-Star results.

Start A Rally . . . The Palos Verdes Dodgers’ Miles Baranick gets a base hit against the Rolling Hills Yankees during the Intermediate King of the Hill championship game at Rolling Hills Little League.

Braves and Palos Verdes Tigers battle through six innings before the Tigers pulled out the 6-5 win in the final game of the season.

Dodgers End A Terrific Season . . . The PV Dodgers’ Robbie Lee slides safely into third base during the Intermediate Division King of the Hill championship game at Rolling Hills Little League.

The Tigers’ Dillon Reddy hits the game winning RBI single against the Silver Spur Braves to win the King of the Hill Major Division championship.

Rays third baseman Bryce Watson comes up throwing for an out during the Major Division King of the Hill semifinal game at Ernie Howlett Park.

Reed Barton leads the Rolling Hills Yankees into the Intermediate King of the Hill finals.

You Paid How Much For That Photo? 5x7 Photo Prints &amp; Downloads Only $7.99

Tigers Kings Of The Hill . . . The Palos Verdes Tigers finished the regular

Check Out The Photo Galleries And See The Latest Edition Of PANORAMA Online!

PVP-PANORAMA wishes to congratulate all Peninsula All-Star teams and their coaches and say thanks to all Peninsula Little Leagues for another great season.

KINGS OF THE HILL