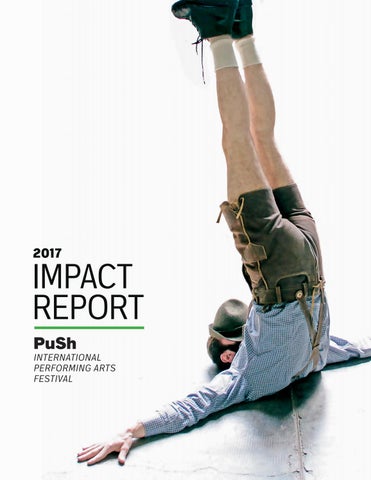 WELCOME MESSAGES The curation of a festival program is the farthest thing from a science. There is little that one can predict and be certain of. The selection of shows—the jigsaw puzzle that one assembles for an audience’s appreciation—is made up of a myriad of considerations. It takes several years of planning to put together each edition of the PuSh International Performing Arts Festival. Hundreds of works are considered; only a handful are chosen for inclusion each January.

The 2017 PuSh International Performing Arts Festival launched the day before the U.S. presidential election last November, and opened the week of the inauguration in January. Vancouver spent the intervening months covered in record-high snowfall. The confluence of these unrelated events might have been an inauspicious start to the 13th annual PuSh Festival. Instead, it proved yet again that art is a powerful tool to bring people together.

What is most important? What must be considered for a festival to succeed? For the PuSh Festival, relevance is the defining factor. It is more important than innovation, creativity or taste-making, or any other aspects often considered to be arbiters of cultural value. As important as these may be, the relevance of a given program is what truly defines a festival of note.

The snowstorm that greeted our one-night-only presentation of dirtsong may have dampened the 1,800 patrons who braved the elements, but it did nothing to dampen their warm-hearted response to this incredible evening of song and community.

To measure success or failure, we need to speak of impact. The meaning and significance of a work of art has so much to do with the viewer and the context of performance. The art’s resonance is rarely known until its reception, and its ultimate impact is rarely appreciated until well into the future. We know in our hearts and minds the impact of a parent, a lover, a friend, or a teacher; of an event or time in our lives. So, too, of art. All together they define who we are, help us make sense of the world, and deepen our understanding of the human condition. In the months since the 2017 PuSh Festival, the impact and legacy of each and every show at this year’s Festival has begun to reveal itself. Our hope with the 2017 program, as with every PuSh edition, is that its ultimate meaning and import will continue to reveal itself, over time, over many years. In the following pages, you will also find examples of the impact that you—our audiences, our donors, our partners—continue to make on the PuSh Festival and on our city. Like the art, it plays out year over year. Together with you, we are building a festival of note.

Indeed, the enthusiasm and engagement of that evening was felt throughout the three weeks of the Festival. From our patrons, donors, volunteers and artists, we heard time and again that—this year, especially—they were grateful for what PuSh brings to Vancouver: the best in contemporary performance and opportunities to connect with one another. PuSh closed the 2017 financial year with more than $2 million in revenue, one of the highest notes in the organization’s history. Staff worked with our board of directors to develop our current strategic plan and embed the vision outlined within it into our everyday work. We continued to strategize our internal systems and practices so that they are as forward thinking as the art we present. PuSh has settled into maturity as a leadership organization that advocates for culture to play a larger role in civic life. We are nourished by the bold and relevant work of our local, national and international artists, and we are inspired to support and champion the artistic community in every way we can. It is never easy to entice Vancouverites out of their homes mid-winter. But year after year, people show up—you show up. As the PuSh Festival heads into our 14th year, we are excited to continue to show up for you as well.

Celebrating a year of success with you!

500 PASSHOLDERS who came to the Festival

during the three-week 2017 festival

PLEDGED BY OUR BOARD OF DIRECTORS FOR A MATCHING CAMPAIGN

DONORS MADE GIFTS IN MEMORY OR IN HONOUR OF LOVED ONES

PROGRAMMING EXCEPTIONAL ART FROM AROUND THE WORLD It takes almost two years—and in some cases, longer—to program artists for an upcoming edition of the PuSh Festival. Throughout the year, our curatorial team, Artistic and Executive Director Norman Armour and Associate Curator Joyce Rosario, work behind the scenes and travel to theatres around the world to survey work by the most exciting artists practicing today. They don’t do it alone; the PuSh Festival is part of a global network of presentation partners who share leads on artists, resources and industry connections. To present dirtsong by Australia’s Black Arm Band at the 2017 PuSh Festival, for instance, required more than three years of collaboration with many partners, over many time zones. We worked with colleagues in Australia, Montreal, Toronto and Calgary to ensure that this timely, important work could be seen by audiences across Canada. Together with our partners we build regional and global tours that allow artists to perform for audiences far and wide.

80+ national and international presentation partners 21 cities in 10 countries visited 29 festivals attended 200+ shows attended PuSh Festival is a crucial link and partner in an evergrowing network of presenters committed to contemporary work and its practioners. PuSh has carved out a very distinct profile and role for itself… Quite simply, it is one of the finest performing arts festivals in the world.” LANE CZAPLINSKI DIRECTOR OF PERFORMING ARTS WEXNER CENTRE FOR THE ARTS (USA)

Over a third of revenue from individual donations come from Patrons Circle donors who have committed to making ongoing contributions—monthly, quarterly and over multiple years. The steady funding provided by these ongoing donors allows us to accomplish our year-round work and achieve our long-term artistic vision, which includes such ambitious and complex projects as dirtsong.

ENGAGING ARTISTS OF THE WORLD TO SPARK DIALOGUE AND EXCHANGE When the PuSh Festival invites the world’s most exciting and important artists to our city their art seeds transformative experiences, opens conversation and expands our perspective of contemporary issues. Their performances at the PuSh Festival and their presence in Vancouver are an open exchange of ideas— between artists and citizens alike. The 2017 PuSh Festival welcomed many remarkable artists, and in particular, a special contingent of five English companies as part of our caravan: new english performance showcase. Through their eye-opening, hopeful works that delve into weighty issues, such as depression, anorexia and social justice, these artists from across the pond did nothing less than show us new ways of being—with courage, heart and humour. Artists and their work leave indelible impressions on audiences, the local community of artists and practitioners, and the city at large.

This show gave us the opportunity to learn about a different topic. A lot of us didn’t really know about mental illness and eating disorders and now we can become more aware of our surroundings and the people around us because you never really know what someone is going through.” STUDENT DICKINS ELEMENTARY SCHOOL ABOUT MESS (CHINA PLATE, ENGLAND)

Patrons Circle donors contribute to covering the costs of hosting the many visiting artists at the PuSh Festival, like this year’s 21 caravan showcase artists and crew from England. Travel and accommodation for visiting artists require significant financial resources, and account for 11% of our annual budget. Donor investments to PuSh support these types of expenses so that the art can be seen in Vancouver.

As a Deaf, gender-neutral, Taiwanese-Chinese person of colour, I found the Youth Academy a tremendous experience. It was amazing. My brain expanded to great heights and horizons through the discussions I was involved in, or just by watching and being who I am in different spaces. I do hope in the future to have more Deaf youth participate in this kind of experience. This was the best gift of the year. I won’t forget it.” PHOTO: TIM MATHESON. PARTICIPANTS AT YOUTH ASSEMBLY.

BUILDING A FUTURE WITH YOUNG PEOPLE At the PuSh Festival, we’re moving forward with young people. With several initiatives, such as the Youth Pass and Youth Academy, that make the arts engaging, entertaining and easier to access, we’re helping to usher the next generation through the rich world of the performing arts. Working hand in hand with young people, we create meaningful opportunities to fill their lives—today and forever—with art, culture and creativity. Concord Floral by Toronto’s Brubacher/Spooner/Tannahill at the 2017 PuSh Festival was one such opportunity, an ambitious project with far-reaching impact. In this Governor General Award-nominated play, a cast of Lower Mainland teenagers—and indeed all teenagers as a class of their own—took centre stage, claiming a space for themselves and demanding to be seen on their own terms. This was a thrilling experiment in creation, collaboration and participation—with youth leading the charge.

Investments made by Patrons Circle donors bring large-scale artistic projects like Concord Floral to life. With these contributions, the PuSh Festival can execute the significant logistics required to support the shows’ creative teams—from casting and rehearsals to marketing and technical production. We wouldn’t be able to do our part without our donors.

SHARING PERFORMING ARTS WITH EVERYONE The PuSh Festival strives to ensure that individuals facing physical, social, cultural or financial barriers can attend our shows because we believe the transformative experiences of the performing arts lead to a brighter future and healthier society for all. We value and embrace each unique audience member; we believe our individual perspectives contribute to our collective strength. For the first time at the 2017 PuSh Festival, we introduced “relaxed performances.” Taking our cue from English artist Jess Thom and her revolutionary play about life with Tourette syndrome, Backstage in Biscuit Land, we offered relaxed performances to welcome anyone— and everyone—who could benefit from a stress-free attitude to noise and movement on the part of audience members, including people on the autism spectrum, with sensory and communication disorders, or a learning disability. It’s a more inclusive theatre environment that embraces, rather than rejects, our individual differences.

It was so refreshing to see Jess perform her hilarious show. It opened my eyes and allowed me to look at my own Tourette’s in a different light, without embarrassment and frustration. I think the best thing someone can do is to continue to learn and understand different minds, and when one hears the words ‘disability’ or ‘disorder’ to not interpret them as ‘less than.’” GEORGIA YOUTH PASSHOLDER ABOUT BACKSTAGE IN BISCUIT LAND (TOURETTESHERO, ENGLAND)

THANK YOU TO OUR PATRONS CIRCLE DONORS For their tremendous generosity to the PuSh Festival, we honour and thank our Patron Circle donors. Their continued and ongoing commitments bring the performing arts to life in Vancouver.

Donors who give on a monthly basis. We extend an extra special thank you to these donors whose monthly gifts ensure the year-round sustainability of the PuSh Festival. Donors who have given for at least five consecutive years. We are honoured to have so many deeply committed donors who continue to see the value in supporting what we do, year after year. This list represents donors from May 1, 2016 to April 30, 2017. Donations made after this date are recognized at pushfestival.ca and in the upcoming 2018 PuSh Festival program guide.

Turn off backgrounds before export

BOARD OF DIRECTORS ACCESSIBLE PUSH COORDINATOR 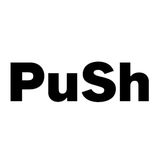