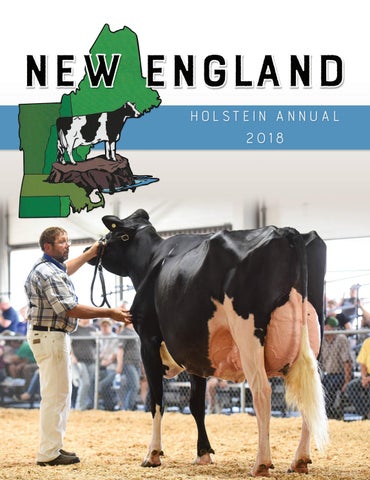 Jerseys will show on the same day. There will be a barbecue Thursday night prior to the show on Friday

Published for the New England Holstein Association by:

astern States Exposition, home of The Big E, has presented the finest livestock, the most innovative commercial, industrial and artistic developments, and the highest caliber of varied entertainment to the people of the northeastern United States for more than a century. More than 1.5 million people now attend the 17 day Big E, an annual autumn extravaganza of entertainment, exhibits and agriculture in West Springfield, Mass. – the culmination of a visionary idea first expressed by Joshua L. Brooks at the beginning of the 20th century. Brooks knew that farming in New England was on the decline and that production costs were soaring. His hope was to create an Exposition that would provide demonstrations of new farming methods and establish competitive awards which would

inspire farmers to produce more efficiently and sponsor cooperative purchasing that would lower their costs. Above all, Brooks believed in developing and showcasing an agricultural New England. In May, 1914, with 63 people listed as original corporators and $200,000 in capital stock, the Eastern States Agricultural and Industrial Exposition was incorporated. Working with regional and community leaders, Brooks spearheaded the purchase of 120 acres of former swampland in West Springfield and a plan was put in place to launch the first Exposition by inviting the prestigious National Dairy Show to hold its 10th annual event at the site. In January, 1916, Brooks and a determined group of New England businessmen and elected officials traveled by rail to Chicago in a blinding snowstorm and convinced the executive body of the National Dairy Show to hold its annual extravaganza in West Springfield, the first time the show was

to be held east of Chicago. In less than nine months, Brooks and his supporters raised $750,000 and constructed the Coliseum, cattle barns, Machinery Hall and a racetrack in time for the October event. At that show, the largest array of purebred dairy cattle ever displayed at a single site broke all previous records set in the Midwest. The National Dairy Show was deemed a huge success with 45,000 in attendance. The West Springfield event inaugurated the State Herd Contest, which became an important feature of future national shows. The history of the ESE Horse Show dates back to 1916, however the show’s roots are in “The First National Springfield Horse Show” held in 1853 on the parade grounds of the Springfield Armory. The show was moved to the Exposition grounds in 1916 under the auspices of The National Dairy Show where it remains the oldest horse show in the United States and in 2016, became a USEF Heritage Competition.

Eastern States Exposition West Springfield, Massachusetts The following year the National Dairy Show returned to Chicago. In the spring of 1917, 122 of the nation’s foremost manufacturers presented their products at the Industrial and Export conference in Exposition Park. And, in the fall of that same year, the very first Eastern States Exposition was opened to the public. A total of 138,000 people gathered at what would become an enduring tradition: the annual September event now known as The Big E. To this day, that tradition has been interrupted only by two World Wars. The 129,400 sq. ft. Mallary Agricultural Complex houses all production livestock including seven different breeds of dairy cattle. Breeders from all over the US and Canada enter their animals at ESE, the largest livestock show in the East, vying for the coveted prize, “Eastern States Exposition Grand Champion.” In addition to the livestock shows, consumer education exhibits, milking demonstrations, Farm to Table initiatives and 4H and FFA contests and programs are an important part of the Fair. The preservation of the New England states’ agricultural land is also encouraged through live exhibits and “hands on” demonstrations of farming techniques and innovations. ESE was the site of the 100th anniversary gathering of the Holstein-Friesian Association (Now Holstein Association USA, Inc.) in June, 1985. In 1994 the Big E became a nationally recognized show again for the Holstein breed. As reported in

business, industry and agriculture alive and thriving in New England, Eastern States Exposition has more than fulfilled the vision of its creator. It remains a site for celebration, a central showplace for the creative, industrial and agricultural resources of the Northeast and a reflection of the best of the region’s people. Photos: Top left: The majestic Coliseum built in 1916 to house the National Dairy Show. Above: The dairy cattle barn

As for the show at the Big E (Northeast Fall National) I’ve been the Holstein Breed Representative for the last several years and along with Arnold Nieminen and Bonnie Burr, the Dairy Superintendents, we have worked on establishing sponsorships from the agricultural industry to help create an enticing show for exhibitors from the Northeast as well as Canada. This, along with the outstanding facilities and exhibitor-friendly atmosphere that we offer, has developed this show into a true benchmark of competition for the Holstein breed. Year after year placings at The Big E help secure nominations in the All-American contest for our exhibitors. Many of the cattle from our show go on to win top honors at the World Dairy Expo in Madison, Wisconsin. -Rick Allyn

PETER WATERMAN is honored with the

When it comes to pedigrees, this year’s Distinguished Service Award winner runs very deep. Coming up through the ranks of state president, and after completing a three-year tenure as president of the association in 2003, Peter went on to chair the much acclaimed 2005 Holstein USA national convention hosted by the New England Association in Maine. Just two years later, he took over the reins of Finance Chair from Lee Salonen and has been serving in that capacity for the past 10 years (yes, 10!), never missing a single annual meeting. Always ready and willing to represent New England dairymen, Peter successfully ran for Holstein USA Region 1 Director in 2010. Over the course of six years of dedicated service on the Holstein Association USA board of directors, Peter was a member of the Executive Committee, and served on the Legislative Affairs, International Marketing and Genetic Advancement Committees. He also served on the Type Advisory Committee for four years, most recently as chair. This pedigree does indeed run deep, and merits additional recognition with the Master Breeder Award. Rodonwa Farm is synonymous with the kind of deep-pedigreed, long-lived, appealing cattle we all strive to breed; the kind that mean there are always terrific cows in the barn, and surplus heifers available. The Rodonwa name consistently appears in the high BAA herd lists published by Holstein USA at 109.9, flirting with that 110 BAA. The herd has been recognized numerous times as Progressive Genetics herd and PBR herd. This Maine Outstanding Young Holstein Breeder in 1994 and Distinguished Dairy Cattle Breeder 2005, is also dedicated

to the other tools for breeding better cows, such as service for “as long as anyone can remember” in the county DHI. The New England Association is proud to present Peter Waterman with this year’s Distinguished Service Award AND Master Breeder Award. For the presentation, Peter was joined by his family, who had successfully managed to keep the awards a secret.

RALPH GUSHEE is honored with the caretaker award A new award was presented at the New England Convention this year - the first ever Caretaker Award. This goes to a person who can stay home and keep the farm running while others are away or can go on the road to care for the top cows in the world and get them to the show ring in winning form. Ralph Gushee was named as the first winner of this award given he has worked with some of the very best cattle New England has ever bred and/or developed. Ralph shared that early in life he was given opportunities to learn. He took advantage of every one of the jobs he was offered if it meant getting to work with the best cattle he could. He thanked those who have believed in and trusted him with their cows, and let him and his family be part of theirs. Ralph was joined by his family for the presentation.

The result of Ralph’s hard work has been to let the cows and the farms that own them shine.

tion for the .. A publica er. dairy breed selective

and Sydney Bullard. At the Junior Awa r d s Lu n c h e o n t h e N e w E n g l a n d J u n i o r s c r a p b o o k p l a c e d fo u r t h a n d the digital scrapbook placed second! T h r o u g h o u t t h e s u m m e r a n d fa l l many youth participated in highquality Holstein shows throughout the region. The biggest show for many of the youth was the Northeast Fall National Holstein Show which is held at the Eastern States Exposition in September. There was a very large and competitive show this past fall and many youth competed in it. A big award presented at the end of the show was the Lee Salonen Award which goes to an outstanding Hollstein junior exhibitor, and it was given to Isabel Hall of Vermont. A huge amount of youth attend the New England Holstein Convention in Auburn, Maine in October. Farm tours began with Juniper Farm and Pineland Farm. After tours many of the young members attended a junior mixer while others attended the Dairy Girl Network event. Saturday morning started with a n A w a r d s B r e a k f a s t . Fo l l o w e d b y the New England Junior Association Annual Meeting. Elections took place with the new officers being, PresidentErin Norris, Vice President- Maggie LaPrise, Secretary- Maddie Beaudry, a n d Tr e a s u r e r - G r e g o r y N o r r i s . T h e membership voted to change officer terms to one year and to begin a New England Holstein Queen and Princess Contest. It was also discussed to hold a Spring Dairy Day in the northern states as well. After the business meeting the c o m p e t i t i o n s b e g a n . Yo u t h t o o k a written test and competed in dairy quiz bowl and jeopardy. The junior quiz bowl team that will compete in Michigan this year is Regan Johnson,

emshaw13@gmail.com purebred.sales@gmail.com Contact them for complete marketing of your genetics!