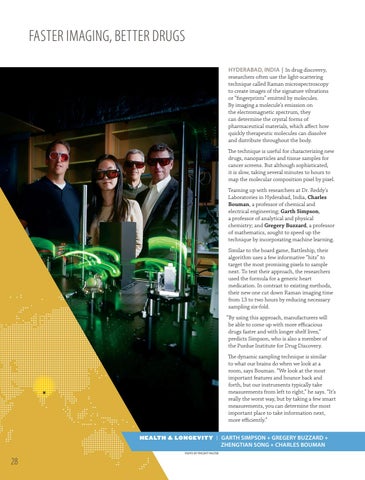 FASTER IMAGING, BETTER DRUGS HYDERABAD, INDIA | In drug discovery, researchers often use the light-scattering technique called Raman microspectroscopy to create images of the signature vibrations or “fingerprints” emitted by molecules. By imaging a molecule’s emission on the electromagnetic spectrum, they can determine the crystal forms of pharmaceutical materials, which affect how quickly therapeutic molecules can dissolve and distribute throughout the body. The technique is useful for characterizing new drugs, nanoparticles and tissue samples for cancer screens. But although sophisticated, it is slow, taking several minutes to hours to map the molecular composition pixel by pixel. Teaming up with researchers at Dr. Reddy’s Laboratories in Hyderabad, India, Charles Bouman, a professor of chemical and electrical engineering; Garth Simpson, a professor of analytical and physical chemistry; and Gregery Buzzard, a professor of mathematics, sought to speed up the technique by incorporating machine learning. Similar to the board game, Battleship, their algorithm uses a few informative “hits” to target the most promising pixels to sample next. To test their approach, the researchers used the formula for a generic heart medication. In contrast to existing methods, their new one cut down Raman imaging time from 13 to two hours by reducing necessary sampling six-fold. “By using this approach, manufacturers will be able to come up with more efficacious drugs faster and with longer shelf lives,” predicts Simpson, who is also a member of the Purdue Institute for Drug Discovery. The dynamic sampling technique is similar to what our brains do when we look at a room, says Bouman. “We look at the most important features and bounce back and forth, but our instruments typically take measurements from left to right,” he says. “It’s really the worst way, but by taking a few smart measurements, you can determine the most important place to take information next, more efficiently.” HEA LTH & LO NGEVITY   | PHOTO BY VINCENT WALTER Purdue University, Office of the Executive Vice President for Research and Partnerships