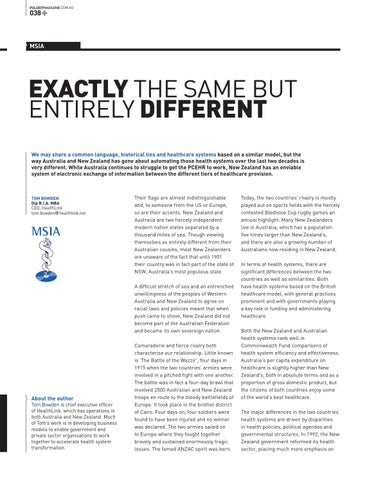 EXACTLY THE SAME BUT ENTIRELY DIFFERENT We may share a common language, historical ties and healthcare systems based on a similar model, but the way Australia and New Zealand has gone about automating those health systems over the last two decades is very different. While Australia continues to struggle to get the PCEHR to work, New Zealand has an enviable system of electronic exchange of information between the different tiers of healthcare provision.

Their flags are almost indistinguishable and, to someone from the US or Europe, so are their accents. New Zealand and Australia are two fiercely independent modern nation states separated by a thousand miles of sea. Though viewing themselves as entirely different from their Australian cousins, most New Zealanders are unaware of the fact that until 1901 their country was in fact part of the state of NSW, Australia’s most populous state. A difficult stretch of sea and an entrenched unwillingness of the peoples of Western Australia and New Zealand to agree on racial laws and policies meant that when push came to shove, New Zealand did not become part of the Australian Federation and became its own sovereign nation.

About the author Tom Bowden is chief executive officer of HealthLink, which has operations in both Australia and New Zealand. Much of Tom’s work is in developing business models to enable government and private sector organisations to work together to accelerate health system transformation.

Camaraderie and fierce rivalry both characterise our relationship. Little known is ‘The Battle of the Wazzir’, four days in 1915 when the two countries’ armies were involved in a pitched fight with one another. The battle was in fact a four-day brawl that involved 2500 Australian and New Zealand troops en route to the bloody battlefields of Europe. It took place in the brothel district of Cairo. Four days on, four soldiers were found to have been injured and no winner was declared. The two armies sailed on to Europe where they fought together bravely and sustained enormously tragic losses. The famed ANZAC spirit was born.

Today, the two countries’ rivalry is mostly played out on sports fields with the fiercely contested Bledisloe Cup rugby games an annual highlight. Many New Zealanders live in Australia, which has a population five times larger than New Zealand’s, and there are also a growing number of Australians now residing in New Zealand. In terms of health systems, there are significant differences between the two countries as well as similarities. Both have health systems based on the British healthcare model, with general practices prominent and with governments playing a key role in funding and administering healthcare. Both the New Zealand and Australian health systems rank well in Commonwealth Fund comparisons of health system efficiency and effectiveness. Australia’s per capita expenditure on healthcare is slightly higher than New Zealand’s, both in absolute terms and as a proportion of gross domestic product, but the citizens of both countries enjoy some of the world’s best healthcare. The major differences in the two countries’ health systems are driven by disparities in health policies, political agendas and governmental structures. In 1992, the New Zealand government reformed its health sector, placing much more emphasis on