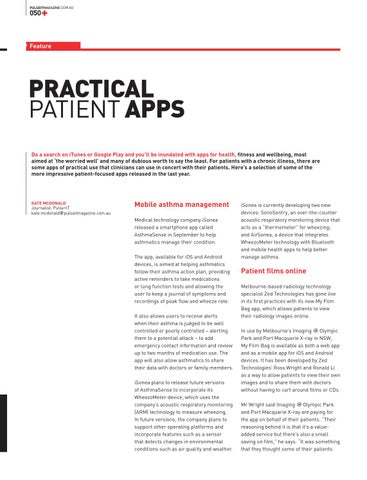 PRACTICAL PATIENT APPS Do a search on iTunes or Google Play and you’ll be inundated with apps for health, fitness and wellbeing, most aimed at ‘the worried well’ and many of dubious worth to say the least. For patients with a chronic illness, there are some apps of practical use that clinicians can use in concert with their patients. Here’s a selection of some of the more impressive patient-focused apps released in the last year.

Mobile asthma management Medical technology company iSonea released a smartphone app called AsthmaSense in September to help asthmatics manage their condition. The app, available for iOS and Android devices, is aimed at helping asthmatics follow their asthma action plan, providing active reminders to take medications or lung function tests and allowing the user to keep a journal of symptoms and recordings of peak flow and wheeze rate. It also allows users to receive alerts when their asthma is judged to be well controlled or poorly controlled – alerting them to a potential attack – to add emergency contact information and review up to two months of medication use. The app will also allow asthmatics to share their data with doctors or family members. iSonea plans to release future versions of AsthmaSense to incorporate its WheezoMeter device, which uses the company’s acoustic respiratory monitoring (ARM) technology to measure wheezing. In future versions, the company plans to support other operating platforms and incorporate features such as a sensor that detects changes in environmental conditions such as air quality and weather.

iSonea is currently developing two new devices: SonoSentry, an over-the-counter acoustic respiratory monitoring device that acts as a “thermometer” for wheezing; and AirSonea, a device that integrates WheezoMeter technology with Bluetooth and mobile health apps to help better manage asthma.

Patient films online Melbourne-based radiology technology specialist Zed Technologies has gone live in its first practices with its new My Film Bag app, which allows patients to view their radiology images online. In use by Melbourne’s Imaging @ Olympic Park and Port Macquarie X-ray in NSW, My Film Bag is available as both a web app and as a mobile app for iOS and Android devices. It has been developed by Zed Technologies’ Ross Wright and Ronald Li as a way to allow patients to view their own images and to share them with doctors without having to cart around films or CDs. Mr Wright said Imaging @ Olympic Park and Port Macquarie X-ray are paying for the app on behalf of their patients. “Their reasoning behind it is that it’s a valueadded service but there’s also a small saving on film,” he says. “It was something that they thought some of their patients