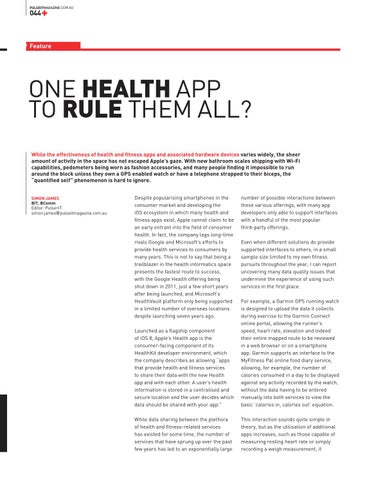 ONE HEALTH APP TO RULE THEM ALL? While the effectiveness of health and fitness apps and associated hardware devices varies widely, the sheer amount of activity in the space has not escaped Apple’s gaze. With new bathroom scales shipping with Wi-Fi capabilities, pedometers being worn as fashion accessories, and many people finding it impossible to run around the block unless they own a GPS enabled watch or have a telephone strapped to their biceps, the “quantified self” phenomenon is hard to ignore. SIMON JAMES BIT, BComm Editor: Pulse+IT simon.james@pulseitmagazine.com.au

Despite popularising smartphones in the consumer market and developing the iOS ecosystem in which many health and fitness apps exist, Apple cannot claim to be an early entrant into the field of consumer health. In fact, the company lags long‑time rivals Google and Microsoft’s efforts to provide health services to consumers by many years. This is not to say that being a trailblazer in the health informatics space presents the fastest route to success, with the Google Health offering being shut down in 2011, just a few short years after being launched, and Microsoft’s HealthVault platform only being supported in a limited number of overseas locations despite launching seven years ago.

number of possible interactions between these various offerings, with many app developers only able to support interfaces with a handful of the most popular third‑party offerings. Even when different solutions do provide supported interfaces to others, in a small sample size limited to my own fitness pursuits throughout the year, I can report uncovering many data quality issues that undermine the experience of using such services in the first place.

Launched as a flagship component of iOS 8, Apple’s Health app is the consumer‑facing component of its HealthKit developer environment, which the company describes as allowing “apps that provide health and fitness services to share their data with the new Health app and with each other. A user’s health information is stored in a centralised and secure location and the user decides which data should be shared with your app.”

For example, a Garmin GPS running watch is designed to upload the data it collects during exercise to the Garmin Connect online portal, allowing the runner’s speed, heart rate, elevation and indeed their entire mapped route to be reviewed in a web browser or on a smartphone app. Garmin supports an interface to the MyFitness Pal online food diary service, allowing, for example, the number of calories consumed in a day to be displayed against any activity recorded by the watch, without the data having to be entered manually into both services to view the basic ‘calories in, calories out’ equation.

While data sharing between the plethora of health and fitness-related services has existed for some time, the number of services that have sprung up over the past few years has led to an exponentially large

This interaction sounds quite simple in theory, but as the utilisation of additional apps increases, such as those capable of measuring resting heart rate or simply recording a weigh measurement, it