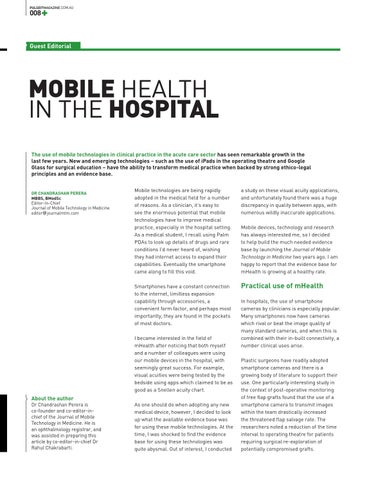 MOBILE HEALTH IN THE HOSPITAL The use of mobile technologies in clinical practice in the acute care sector has seen remarkable growth in the last few years. New and emerging technologies – such as the use of iPads in the operating theatre and Google Glass for surgical education – have the ability to transform medical practice when backed by strong ethico-legal principles and an evidence base. DR CHANDRASHAN PERERA MBBS, BMedSc Editor-In-Chief Journal of Mobile Technology in Medicine editor@journalmtm.com

Mobile technologies are being rapidly adopted in the medical field for a number of reasons. As a clinician, it’s easy to see the enormous potential that mobile technologies have to improve medical practice, especially in the hospital setting. As a medical student, I recall using Palm PDAs to look up details of drugs and rare conditions I’d never heard of, wishing they had internet access to expand their capabilities. Eventually the smartphone came along to fill this void.

a study on these visual acuity applications, and unfortunately found there was a huge discrepancy in quality between apps, with numerous wildly inaccurate applications.

Smartphones have a constant connection to the internet, limitless expansion capability through accessories, a convenient form factor, and perhaps most importantly, they are found in the pockets of most doctors.

Practical use of mHealth

I became interested in the field of mHealth after noticing that both myself and a number of colleagues were using our mobile devices in the hospital, with seemingly great success. For example, visual acuities were being tested by the bedside using apps which claimed to be as good as a Snellen acuity chart.

About the author Dr Chandrashan Perera is co-founder and co-editor-inchief of the Journal of Mobile Technology in Medicine. He is an ophthalmology registrar, and was assisted in preparing this article by co-editor-in-chief Dr Rahul Chakrabarti.

Mobile devices, technology and research has always interested me, so I decided to help build the much needed evidence base by launching the Journal of Mobile Technology in Medicine two years ago. I am happy to report that the evidence base for mHealth is growing at a healthy rate.

In hospitals, the use of smartphone cameras by clinicians is especially popular. Many smartphones now have cameras which rival or beat the image quality of many standard cameras, and when this is combined with their in-built connectivity, a number clinical uses arise. Plastic surgeons have readily adopted smartphone cameras and there is a growing body of literature to support their use. One particularly interesting study in the context of post-operative monitoring of free flap grafts found that the use of a smartphone camera to transmit images within the team drastically increased the threatened flap salvage rate. The researchers noted a reduction of the time interval to operating theatre for patients requiring surgical re-exploration of potentially compromised grafts.