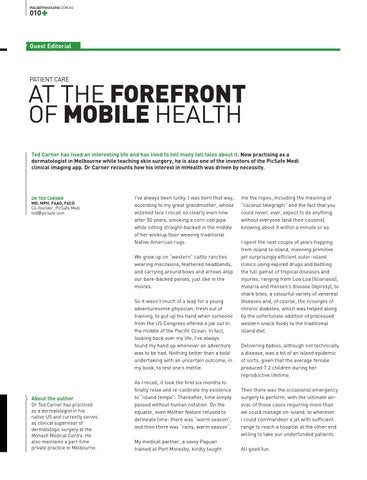 AT THE FOREFRONT OF MOBILE HEALTH Ted Carner has lived an interesting life and has lived to tell many tall tales about it. Now practising as a dermatologist in Melbourne while teaching skin surgery, he is also one of the inventors of the PicSafe Medi clinical imaging app. Dr Carner recounts how his interest in mHealth was driven by necessity.

I’ve always been lucky. I was born that way, according to my great grandmother, whose wizened face I recall so clearly even now after 50 years, smoking a corn-cob pipe while sitting straight-backed in the middle of her wickiup floor weaving traditional Native American rugs. We grew up on “western” cattle ranches wearing moccasins, feathered headbands, and carrying around bows and arrows atop our bare-backed ponies, just like in the movies. So it wasn’t much of a leap for a young adventuresome physician, fresh out of training, to put up his hand when someone from the US Congress offered a job out in the middle of the Pacific Ocean. In fact, looking back over my life, I’ve always found my hand up whenever an adventure was to be had. Nothing better than a bold undertaking with an uncertain outcome, in my book, to test one’s mettle.

About the author Dr Ted Carner has practiced as a dermatologist in his native US and currently serves as clinical supervisor of dermatologic surgery at the Monash Medical Centre. He also maintains a part-time private practice in Melbourne.

As I recall, it took the first six months to finally relax and re-calibrate my existence to “island tempo”. Thereafter, time simply passed without human notation. On the equator, even Mother Nature refused to delineate time: there was “warm season”, and then there was “rainy, warm season”. My medical partner, a savvy Papuan trained at Port Moresby, kindly taught

me the ropes, including the meaning of “coconut telegraph” and the fact that you could never, ever, expect to do anything without everyone (and their cousins) knowing about it within a minute or so. I spent the next couple of years hopping from island to island, manning primitive yet surprisingly efficient outer-island clinics using expired drugs and battling the full gamut of tropical diseases and injuries, ranging from Loa Loa (filiariasis), malaria and Hansen’s disease (leprosy), to shark bites, a colourful variety of venereal diseases and, of course, the scourges of chronic diabetes, which was helped along by the unfortunate addition of processed western snack foods to the traditional island diet. Delivering babies, although not technically a disease, was a bit of an island epidemic of sorts, given that the average female produced 7.2 children during her reproductive lifetime. Then there was the occasional emergency surgery to perform, with the ultimate airevac of those cases requiring more than we could manage on-island, to wherever I could commandeer a jet with sufficient range to reach a hospital at the other end willing to take our underfunded patients. All good fun.