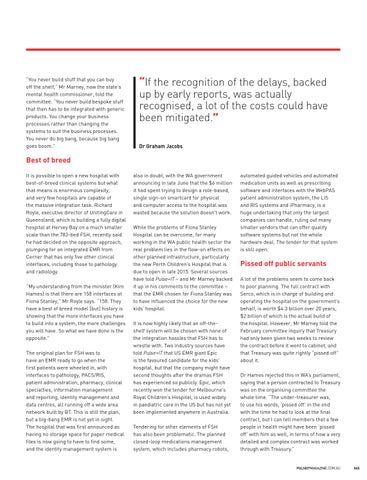 “If the recognition of the delays, backed up by early reports, was actually recognised, a lot of the costs could have been mitigated.” Dr Graham Jacobs

Best of breed It is possible to open a new hospital with best-of-breed clinical systems but what that means is enormous complexity, and very few hospitals are capable of the massive integration task. Richard Royle, executive director of UnitingCare in Queensland, which is building a fully digital hospital at Hervey Bay on a much smaller scale than the 783-bed FSH, recently said he had decided on the opposite approach, plumping for an integrated EMR from Cerner that has only five other clinical interfaces, including those to pathology and radiology. “My understanding from the minister (Kim Hames) is that there are 158 interfaces at Fiona Stanley,” Mr Royle says. “158. They have a best of breed model [but] history is showing that the more interfaces you have to build into a system, the more challenges you will have. So what we have done is the opposite.” The original plan for FSH was to have an EMR ready to go when the first patients were wheeled in, with interfaces to pathology, PACS/RIS, patient administration, pharmacy, clinical specialties, information management and reporting, identity management and data centres, all running off a wide area network built by BT. This is still the plan, but a big-bang EMR is not yet in sight. The hospital that was first announced as having no storage space for paper medical files is now going to have to find some, and the identity management system is

also in doubt, with the WA government announcing in late June that the $6 million it had spent trying to design a role-based, single sign-on smartcard for physical and computer access to the hospital was wasted because the solution doesn’t work. While the problems of Fiona Stanley Hospital can be overcome, for many working in the WA public health sector the real problem lies in the flow-on effects on other planned infrastructure, particularly the new Perth Children’s Hospital that is due to open in late 2015. Several sources have told Pulse+IT – and Mr Marney backed it up in his comments to the committee – that the EMR chosen for Fiona Stanley was to have influenced the choice for the new kids’ hospital. It is now highly likely that an off-theshelf system will be chosen with none of the integration hassles that FSH has to wrestle with. Two industry sources have told Pulse+IT that US EMR giant Epic is the favoured candidate for the kids’ hospital, but that the company might have second thoughts after the dramas FSH has experienced so publicly. Epic, which recently won the tender for Melbourne’s Royal Children’s Hospital, is used widely in paediatric care in the US but has not yet been implemented anywhere in Australia. Tendering for other elements of FSH has also been problematic. The planned closed-loop medications management system, which includes pharmacy robots,

automated guided vehicles and automated medication units as well as prescribing software and interfaces with the WebPAS patient administration system, the LIS and RIS systems and iPharmacy, is a huge undertaking that only the largest companies can handle, ruling out many smaller vendors that can offer quality software systems but not the whole hardware deal. The tender for that system is still open.

Pissed off public servants A lot of the problems seem to come back to poor planning. The full contract with Serco, which is in charge of building and operating the hospital on the government’s behalf, is worth $4.3 billion over 20 years, $2 billion of which is the actual build of the hospital. However, Mr Marney told the February committee inquiry that Treasury had only been given two weeks to review the contract before it went to cabinet, and that Treasury was quite rightly “pissed off” about it. Dr Hames rejected this in WA’s parliament, saying that a person contracted to Treasury was on the organising committee the whole time. “The under-treasurer was, to use his words, ‘pissed off’ in the end with the time he had to look at the final contract, but I can tell members that a few people in health might have been ‘pissed off’ with him as well, in terms of how a very detailed and complex contract was worked through with Treasury.”