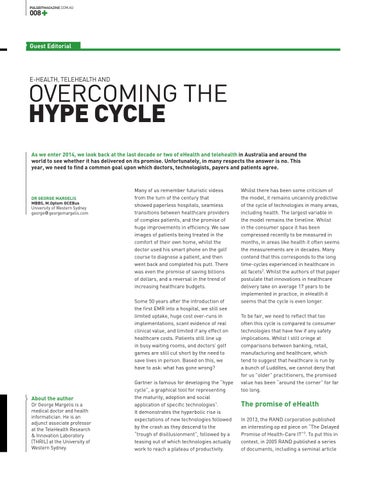 OVERCOMING THE HYPE CYCLE As we enter 2014, we look back at the last decade or two of eHealth and telehealth in Australia and around the world to see whether it has delivered on its promise. Unfortunately, in many respects the answer is no. This year, we need to find a common goal upon which doctors, technologists, payers and patients agree.

Many of us remember futuristic videos from the turn of the century that showed paperless hospitals, seamless transitions between healthcare providers of complex patients, and the promise of huge improvements in efficiency. We saw images of patients being treated in the comfort of their own home, whilst the doctor used his smart phone on the golf course to diagnose a patient, and then went back and completed his putt. There was even the promise of saving billions of dollars, and a reversal in the trend of increasing healthcare budgets. Some 50 years after the introduction of the first EMR into a hospital, we still see limited uptake, huge cost over-runs in implementations, scant evidence of real clinical value, and limited if any effect on healthcare costs. Patients still line up in busy waiting rooms, and doctors’ golf games are still cut short by the need to save lives in person. Based on this, we have to ask: what has gone wrong?

About the author Dr George Margelis is a medical doctor and health informatician. He is an adjunct associate professor at the TeleHealth Research &amp; Innovation Laboratory (THRIL) at the University of Western Sydney.

Gartner is famous for developing the “hype cycle”, a graphical tool for representing the maturity, adoption and social application of specific technologies1. It demonstrates the hyperbolic rise is expectations of new technologies followed by the crash as they descend to the “trough of disillusionment”, followed by a teasing out of which technologies actually work to reach a plateau of productivity.

Whilst there has been some criticism of the model, it remains uncannily predictive of the cycle of technologies in many areas, including health. The largest variable in the model remains the timeline. Whilst in the consumer space it has been compressed recently to be measured in months, in areas like health it often seems the measurements are in decades. Many contend that this corresponds to the long time-cycles experienced in healthcare in all facets2. Whilst the authors of that paper postulate that innovations in healthcare delivery take on average 17 years to be implemented in practice, in eHealth it seems that the cycle is even longer. To be fair, we need to reflect that too often this cycle is compared to consumer technologies that have few if any safety implications. Whilst I still cringe at comparisons between banking, retail, manufacturing and healthcare, which tend to suggest that healthcare is run by a bunch of Luddites, we cannot deny that for us ”older” practitioners, the promised value has been “around the corner” for far too long.

The promise of eHealth In 2013, the RAND corporation published an interesting op ed piece on “The Delayed Promise of Health-Care IT”3. To put this in context, in 2005 RAND published a series of documents, including a seminal article