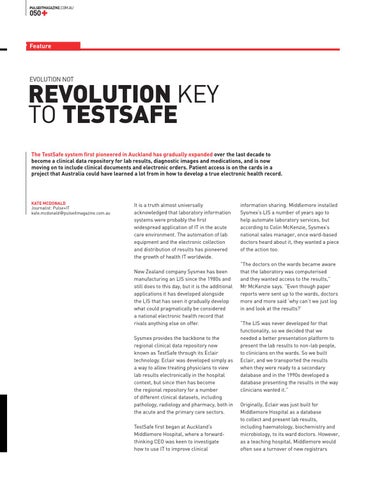 REVOLUTION KEY TO TESTSAFE The TestSafe system first pioneered in Auckland has gradually expanded over the last decade to become a clinical data repository for lab results, diagnostic images and medications, and is now moving on to include clinical documents and electronic orders. Patient access is on the cards in a project that Australia could have learned a lot from in how to develop a true electronic health record.

It is a truth almost universally acknowledged that laboratory information systems were probably the first widespread application of IT in the acute care environment. The automation of lab equipment and the electronic collection and distribution of results has pioneered the growth of health IT worldwide. New Zealand company Sysmex has been manufacturing an LIS since the 1980s and still does to this day, but it is the additional applications it has developed alongside the LIS that has seen it gradually develop what could pragmatically be considered a national electronic health record that rivals anything else on offer. Sysmex provides the backbone to the regional clinical data repository now known as TestSafe through its Eclair technology. Eclair was developed simply as a way to allow treating physicians to view lab results electronically in the hospital context, but since then has become the regional repository for a number of different clinical datasets, including pathology, radiology and pharmacy, both in the acute and the primary care sectors. TestSafe first began at Auckland’s Middlemore Hospital, where a forwardthinking CEO was keen to investigate how to use IT to improve clinical

information sharing. Middlemore installed Sysmex’s LIS a number of years ago to help automate laboratory services, but according to Colin McKenzie, Sysmex’s national sales manager, once ward-based doctors heard about it, they wanted a piece of the action too. “The doctors on the wards became aware that the laboratory was computerised and they wanted access to the results,” Mr McKenzie says. “Even though paper reports were sent up to the wards, doctors more and more said ‘why can’t we just log in and look at the results?’ “The LIS was never developed for that functionality, so we decided that we needed a better presentation platform to present the lab results to non-lab people, to clinicians on the wards. So we built Eclair, and we transported the results when they were ready to a secondary database and in the 1990s developed a database presenting the results in the way clinicians wanted it.” Originally, Eclair was just built for Middlemore Hospital as a database to collect and present lab results, including haematology, biochemistry and microbiology, to its ward doctors. However, as a teaching hospital, Middlemore would often see a turnover of new registrars