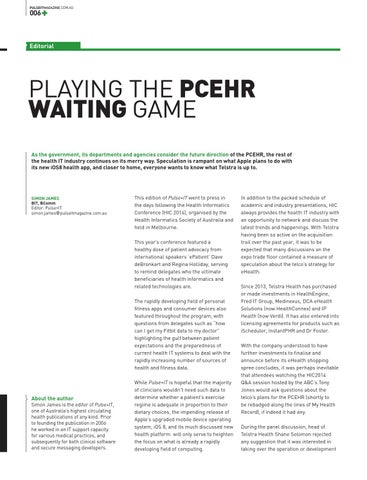 PLAYING THE PCEHR WAITING GAME As the government, its departments and agencies consider the future direction of the PCEHR, the rest of the health IT industry continues on its merry way. Speculation is rampant on what Apple plans to do with its new iOS8 health app, and closer to home, everyone wants to know what Telstra is up to.

This edition of Pulse+IT went to press in the days following the Health Informatics Conference (HIC 2014), organised by the Health Informatics Society of Australia and held in Melbourne. This year’s conference featured a healthy dose of patient advocacy from international speakers ‘ePatient’ Dave deBronkart and Regina Holliday, serving to remind delegates who the ultimate beneficiaries of health informatics and related technologies are. The rapidly developing field of personal fitness apps and consumer devices also featured throughout the program, with questions from delegates such as “how can I get my Fitbit data to my doctor” highlighting the gulf between patient expectations and the preparedness of current health IT systems to deal with the rapidly increasing number of sources of health and fitness data.

About the author Simon James is the editor of Pulse+IT, one of Australia’s highest circulating health publications of any kind. Prior to founding the publication in 2006 he worked in an IT support capacity for various medical practices, and subsequently for both clinical software and secure messaging developers.

While Pulse+IT is hopeful that the majority of clinicians wouldn’t need such data to determine whether a patient’s exercise regime is adequate in proportion to their dietary choices, the impending release of Apple’s upgraded mobile device operating system, iOS 8, and its much discussed new health platform will only serve to heighten the focus on what is already a rapidly developing field of computing.

In addition to the packed schedule of academic and industry presentations, HIC always provides the health IT industry with an opportunity to network and discuss the latest trends and happenings. With Telstra having been so active on the acquisition trail over the past year, it was to be expected that many discussions on the expo trade floor contained a measure of speculation about the telco’s strategy for eHealth. Since 2013, Telstra Health has purchased or made investments in HealthEngine, Fred IT Group, Medinexus, DCA eHealth Solutions (now HealthConnex) and IP Health (now Verdi). It has also entered into licensing agreements for products such as iScheduler, InstantPHR and Dr Foster. With the company understood to have further investments to finalise and announce before its eHealth shopping spree concludes, it was perhaps inevitable that attendees watching the HIC2014 Q&A session hosted by the ABC’s Tony Jones would ask questions about the telco’s plans for the PCEHR (shortly to be rebadged along the lines of My Health Record), if indeed it had any. During the panel discussion, head of Telstra Health Shane Solomon rejected any suggestion that it was interested in taking over the operation or development