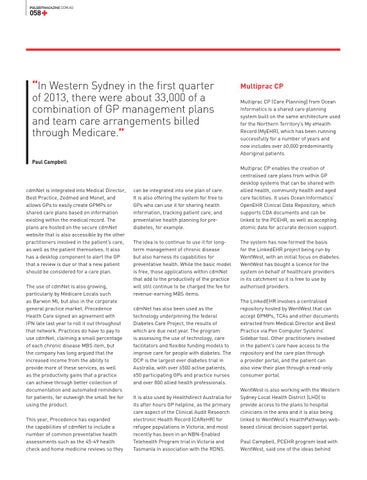 “In Western Sydney in the first quarter of 2013, there were about 33,000 of a combination of GP management plans and team care arrangements billed through Medicare.” Paul Campbell

cdmNet is integrated into Medical Director, Best Practice, Zedmed and Monet, and allows GPs to easily create GPMPs or shared care plans based on information existing within the medical record. The plans are hosted on the secure cdmNet website that is also accessible by the other practitioners involved in the patient’s care, as well as the patient themselves. It also has a desktop component to alert the GP that a review is due or that a new patient should be considered for a care plan. The use of cdmNet is also growing, particularly by Medicare Locals such as Barwon ML but also in the corporate general practice market. Precedence Health Care signed an agreement with IPN late last year to roll it out throughout that network. Practices do have to pay to use cdmNet, claiming a small percentage of each chronic disease MBS item, but the company has long argued that the increased income from the ability to provide more of these services, as well as the productivity gains that a practice can achieve through better collection of documentation and automated reminders for patients, far outweigh the small fee for using the product. This year, Precedence has expanded the capabilities of cdmNet to include a number of common preventative health assessments such as the 45-49 health check and home medicine reviews so they

can be integrated into one plan of care. It is also offering the system for free to GPs who can use it for sharing health information, tracking patient care, and preventative health planning for prediabetes, for example. The idea is to continue to use it for longterm management of chronic disease but also harness its capabilities for preventative health. While the basic model is free, those applications within cdmNet that add to the productivity of the practice will still continue to be charged the fee for revenue-earning MBS items. cdmNet has also been used as the technology underpinning the federal Diabetes Care Project, the results of which are due next year. The program is assessing the use of technology, care facilitators and flexible funding models to improve care for people with diabetes. The DCP is the largest ever diabetes trial in Australia, with over 6500 active patients, 650 participating GPs and practice nurses and over 800 allied health professionals. It is also used by Healthdirect Australia for its after hours GP helpline, as the primary care aspect of the Clinical Audit Research electronic Health Record (CAReHR) for refugee populations in Victoria, and most recently has been in an NBN-Enabled Telehealth Program trial in Victoria and Tasmania in association with the RDNS.

Multiprac CP Multiprac CP (Care Planning) from Ocean Informatics is a shared care planning system built on the same architecture used for the Northern Territory’s My eHealth Record (MyEHR), which has been running successfully for a number of years and now includes over 60,000 predominantly Aboriginal patients. Multiprac CP enables the creation of centralised care plans from within GP desktop systems that can be shared with allied health, community health and aged care facilities. It uses Ocean Informatics’ OpenEHR Clinical Data Repository, which supports CDA documents and can be linked to the PCEHR, as well as accepting atomic data for accurate decision support. The system has now formed the basis for the LinkedEHR project being run by WentWest, with an initial focus on diabetes. WentWest has bought a licence for the system on behalf of healthcare providers in its catchment so it is free to use by authorised providers. The LinkedEHR involves a centralised repository hosted by WentWest that can accept GPMPs, TCAs and other documents extracted from Medical Director and Best Practice via Pen Computer Systems’ Sidebar tool. Other practitioners involved in the patient’s care have access to the repository and the care plan through a provider portal, and the patient can also view their plan through a read-only consumer portal. WentWest is also working with the Western Sydney Local Health District (LHD) to provide access to the plans to hospital clinicians in the area and it is also being linked to WentWest’s HealthPathways webbased clinical decision support portal. Paul Campbell, PCEHR program lead with WentWest, said one of the ideas behind