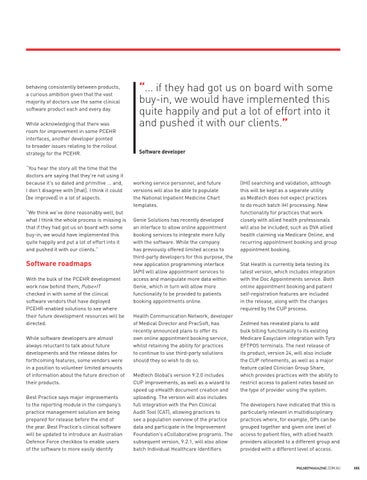 behaving consistently between products, a curious ambition given that the vast majority of doctors use the same clinical software product each and every day. While acknowledging that there was room for improvement in some PCEHR interfaces, another developer pointed to broader issues relating to the rollout strategy for the PCEHR. “You hear the story all the time that the doctors are saying that they’re not using it because it’s so dated and primitive ... and, I don’t disagree with [that]. I think it could [be improved] in a lot of aspects. “We think we’ve done reasonably well, but what I think the whole process is missing is that if they had got us on board with some buy-in, we would have implemented this quite happily and put a lot of effort into it and pushed it with our clients.”

Software roadmaps With the bulk of the PCEHR development work now behind them, Pulse+IT checked in with some of the clinical software vendors that have deployed PCEHR‑enabled solutions to see where their future development resources will be directed. While software developers are almost always reluctant to talk about future developments and the release dates for forthcoming features, some vendors were in a position to volunteer limited amounts of information about the future direction of their products. Best Practice says major improvements to the reporting module in the company’s practice management solution are being prepared for release before the end of the year. Best Practice’s clinical software will be updated to introduce an Australian Defence Force checkbox to enable users of the software to more easily identify

“... if they had got us on board with some buy-in, we would have implemented this quite happily and put a lot of effort into it and pushed it with our clients.” Software developer

working service personnel, and future versions will also be able to populate the National Inpatient Medicine Chart templates. Genie Solutions has recently developed an interface to allow online appointment booking services to integrate more fully with the software. While the company has previously offered limited access to third‑party developers for this purpose, the new application programming interface (API) will allow appointment services to access and manipulate more data within Genie, which in turn will allow more functionality to be provided to patients booking appointments online. Health Communication Network, developer of Medical Director and PracSoft, has recently announced plans to offer its own online appointment booking service, whilst retaining the ability for practices to continue to use third-party solutions should they so wish to do so. Medtech Global’s version 9.2.0 includes CUP improvements, as well as a wizard to speed up eHealth document creation and uploading. The version will also includes full integration with the Pen Clinical Audit Tool (CAT), allowing practices to see a population overview of the practice data and participate in the Improvement Foundation’s eCollaborative programs. The subsequent version, 9.2.1, will also allow batch Individual Healthcare Identifiers

(IHI) searching and validation, although this will be kept as a separate utility as Medtech does not expect practices to do much batch IHI processing. New functionality for practices that work closely with allied health professionals will also be included, such as DVA allied health claiming via Medicare Online, and recurring appointment booking and group appointment booking. Stat Health is currently beta testing its latest version, which includes integration with the Doc Appointments service. Both online appointment booking and patient self-registration features are included in the release, along with the changes required by the CUP process. Zedmed has revealed plans to add bulk billing functionality to its existing Medicare Easyclaim integration with Tyro EFTPOS terminals. The next release of its product, version 24, will also include the CUP refinements, as well as a major feature called Clinician Group Share, which provides practices with the ability to restrict access to patient notes based on the type of provider using the system. The developers have indicated that this is particularly relevant in multidisciplinary practices where, for example, GPs can be grouped together and given one level of access to patient files, with allied health providers allocated to a different group and provided with a different level of access.