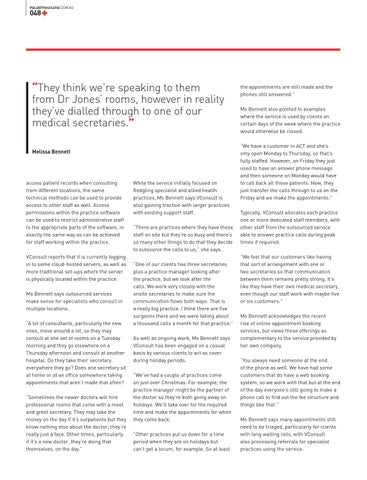 “They think we’re speaking to them from Dr Jones’ rooms, however in reality they’ve dialled through to one of our medical secretaries.” Melissa Bennett

access patient records when consulting from different locations, the same technical methods can be used to provide access to other staff as well. Access permissions within the practice software can be used to restrict administrative staff to the appropriate parts of the software, in exactly the same way as can be achieved for staff working within the practice. VConsult reports that it is currently logging in to some cloud-hosted servers, as well as more traditional set‑ups where the server is physically located within the practice. Ms Bennett says outsourced services make sense for specialists who consult in multiple locations. “A lot of consultants, particularly the new ones, move around a lot, so they may consult at one set of rooms on a Tuesday morning and they go elsewhere on a Thursday afternoon and consult at another hospital. Do they take their secretary everywhere they go? Does one secretary sit at home or at an office somewhere taking appointments that aren’t made that often? “Sometimes the newer doctors will hire professional rooms that come with a meet and greet secretary. They may take the money on the day if it’s outpatients but they know nothing else about the doctor; they’re really just a face. Other times, particularly if it’s a new doctor, they’re doing that themselves, on the day.”

While the service initially focused on fledgling specialist and allied health practices, Ms Bennett says VConsult is also gaining traction with larger practices with existing support staff. “There are practices where they have these staff on site but they’re so busy and there’s so many other things to do that they decide to outsource the calls to us,” she says. “One of our clients has three secretaries plus a practice manager looking after the practice, but we look after the calls. We work very closely with the onsite secretaries to make sure the communication flows both ways. That is a really big practice. I think there are five surgeons there and we were taking about a thousand calls a month for that practice.” As well as ongoing work, Ms Bennett says VConsult has been engaged on a casual basis by various clients to act as cover during holiday periods. “We’ve had a couple of practices come on just over Christmas. For example, the practice manager might be the partner of the doctor so they’re both going away on holidays. We’ll take over for the required time and make the appointments for when they come back. “Other practices put us down for a time period when they are on holidays but can’t get a locum, for example. So at least

the appointments are still made and the phones still answered.” Ms Bennett also pointed to examples where the service is used by clients on certain days of the week where the practice would otherwise be closed. “We have a customer in ACT and she’s only open Monday to Thursday, so that’s fully staffed. However, on Friday they just used to have an answer phone message and then someone on Monday would have to call back all those patients. Now, they just transfer the calls through to us on the Friday and we make the appointments.” Typically, VConsult allocates each practice one or more dedicated staff members, with other staff from the outsourced service able to answer practice calls during peak times if required. “We feel that our customers like having that sort of arrangement with one or two secretaries so that communication between them remains pretty strong. It’s like they have their own medical secretary, even though our staff work with maybe five or six customers.” Ms Bennett acknowledges the recent rise of online appointment booking services, but views these offerings as complementary to the service provided by her own company. “You always need someone at the end of the phone as well. We have had some customers that do have a web booking system, so we work with that but at the end of the day everyone’s still going to make a phone call to find out the fee structure and things like that.” Ms Bennett says many appointments still need to be triaged, particularly for clients with long waiting lists, with VConsult also processing referrals for specialist practices using the service.