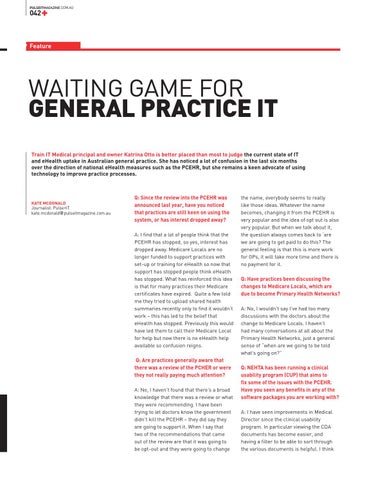 WAITING GAME FOR GENERAL PRACTICE IT Train IT Medical principal and owner Katrina Otto is better placed than most to judge the current state of IT and eHealth uptake in Australian general practice. She has noticed a lot of confusion in the last six months over the direction of national eHealth measures such as the PCEHR, but she remains a keen advocate of using technology to improve practice processes.

Q: Since the review into the PCEHR was announced last year, have you noticed that practices are still keen on using the system, or has interest dropped away? A: I find that a lot of people think that the PCEHR has stopped, so yes, interest has dropped away. Medicare Locals are no longer funded to support practices with set-up or training for eHealth so now that support has stopped people think eHealth has stopped. What has reinforced this idea is that for many practices their Medicare certificates have expired. Quite a few told me they tried to upload shared health summaries recently only to find it wouldn’t work – this has led to the belief that eHealth has stopped. Previously this would have led them to call their Medicare Local for help but now there is no eHealth help available so confusion reigns. Q: Are practices generally aware that there was a review of the PCHER or were they not really paying much attention? A: No, I haven’t found that there’s a broad knowledge that there was a review or what they were recommending. I have been trying to let doctors know the government didn’t kill the PCEHR – they did say they are going to support it. When I say that two of the recommendations that came out of the review are that it was going to be opt-out and they were going to change

the name, everybody seems to really like those ideas. Whatever the name becomes, changing it from the PCEHR is very popular and the idea of opt out is also very popular. But when we talk about it, the question always comes back to ‘are we are going to get paid to do this? The general feeling is that this is more work for GPs, it will take more time and there is no payment for it. Q: Have practices been discussing the changes to Medicare Locals, which are due to become Primary Health Networks? A: No, I wouldn’t say I’ve had too many discussions with the doctors about the change to Medicare Locals. I haven’t had many conversations at all about the Primary Health Networks, just a general sense of “when are we going to be told what’s going on?” Q: NEHTA has been running a clinical usability program (CUP) that aims to fix some of the issues with the PCEHR. Have you seen any benefits in any of the software packages you are working with? A: I have seen improvements in Medical Director since the clinical usability program. In particular viewing the CDA documents has become easier, and having a filter to be able to sort through the various documents is helpful. I think