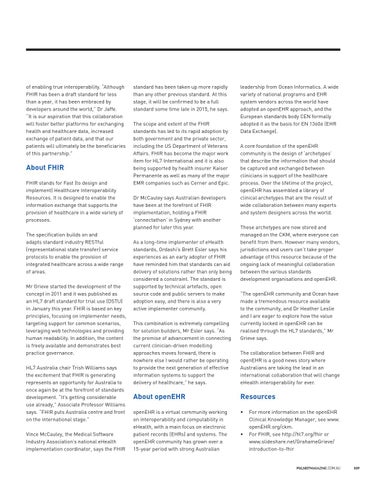 of enabling true interoperability. “Although FHIR has been a draft standard for less than a year, it has been embraced by developers around the world,” Dr Jaffe. “It is our aspiration that this collaboration will foster better platforms for exchanging health and healthcare data, increased exchange of patient data, and that our patients will ultimately be the beneficiaries of this partnership.”

About FHIR FHIR stands for Fast (to design and implement) Healthcare Interoperability Resources. It is designed to enable the information exchange that supports the provision of healthcare in a wide variety of processes. The specification builds on and adapts standard industry RESTful (representational state transfer) service protocols to enable the provision of integrated healthcare across a wide range of areas. Mr Grieve started the development of the concept in 2011 and it was published as an HL7 draft standard for trial use (DSTU) in January this year. FHIR is based on key principles, focusing on implementer needs, targeting support for common scenarios, leveraging web technologies and providing human readability. In addition, the content is freely available and demonstrates best practice governance. HL7 Australia chair Trish Williams says the excitement that FHIR is generating represents an opportunity for Australia to once again be at the forefront of standards development. “It’s getting considerable use already,” Associate Professor Williams says. “FHIR puts Australia centre and front on the international stage.” Vince McCauley, the Medical Software Industry Association’s national eHealth implementation coordinator, says the FHIR

standard has been taken up more rapidly than any other previous standard. At this stage, it will be confirmed to be a full standard some time late in 2015, he says. The scope and extent of the FHIR standards has led to its rapid adoption by both government and the private sector, including the US Department of Veterans Affairs. FHIR has become the major work item for HL7 International and it is also being supported by health insurer Kaiser Permanente as well as many of the major EMR companies such as Cerner and Epic. Dr McCauley says Australian developers have been at the forefront of FHIR implementation, holding a FHIR ‘connectathon’ in Sydney with another planned for later this year. As a long-time implementer of eHealth standards, Ordashi’s Brett Esler says his experiences as an early adopter of FHIR have reminded him that standards can aid delivery of solutions rather than only being considered a constraint. The standard is supported by technical artefacts, open source code and public servers to make adoption easy, and there is also a very active implementer community. This combination is extremely compelling for solution builders, Mr Esler says. “As the promise of advancement in connecting current clinician-driven modelling approaches moves forward, there is nowhere else I would rather be operating to provide the next generation of effective information systems to support the delivery of healthcare,” he says.

leadership from Ocean Informatics. A wide variety of national programs and EHR system vendors across the world have adopted an openEHR approach, and the European standards body CEN formally adopted it as the basis for EN 13606 (EHR Data Exchange). A core foundation of the openEHR community is the design of ‘archetypes’ that describe the information that should be captured and exchanged between clinicians in support of the healthcare process. Over the lifetime of the project, openEHR has assembled a library of clinical archetypes that are the result of wide collaboration between many experts and system designers across the world. These archetypes are now stored and managed on the CKM, where everyone can benefit from them. However many vendors, jurisdictions and users can’t take proper advantage of this resource because of the ongoing lack of meaningful collaboration between the various standards development organisations and openEHR. “The openEHR community and Ocean have made a tremendous resource available to the community, and Dr Heather Leslie and I are eager to explore how the value currently locked in openEHR can be realised through the HL7 standards,” Mr Grieve says. The collaboration between FHIR and openEHR is a good news story where Australians are taking the lead in an international collaboration that will change eHealth interoperability for ever.

openEHR is a virtual community working on interoperability and computability in eHealth, with a main focus on electronic patient records (EHRs) and systems. The openEHR community has grown over a 15-year period with strong Australian