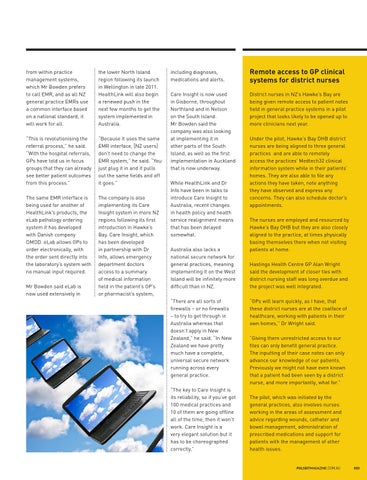 from within practice management systems, which Mr Bowden prefers to call EMR, and as all NZ general practice EMRs use a common interface based on a national standard, it will work for all.

the lower North Island region following its launch in Wellington in late 2011. HealthLink will also begin a renewed push in the next few months to get the system implemented in Australia.

“This is revolutionising the referral process,” he said. “With the hospital referrals, GPs have told us in focus groups that they can already see better patient outcomes from this process.”

“Because it uses the same EMR interface, [NZ users] don’t need to change the EMR system,” he said. “You just plug it in and it pulls out the same fields and off it goes.”

The same EMR interface is being used for another of HealthLink’s products, the eLab pathology ordering system it has developed with Danish company DMDD. eLab allows GPs to order electronically, with the order sent directly into the laboratory’s system with no manual input required.

The company is also implementing its Care Insight system in more NZ regions following its first introduction in Hawke’s Bay. Care Insight, which has been developed in partnership with Dr Info, allows emergency department doctors access to a summary of medical information held in the patient’s GP’s or pharmacist’s system,

including diagnoses, medications and alerts.

Care Insight is now used in Gisborne, throughout Northland and in Nelson on the South Island. Mr Bowden said the company was also looking at implementing it in other parts of the South Island, as well as the first implementation in Auckland that is now underway.

District nurses in NZ’s Hawke’s Bay are being given remote access to patient notes held in general practice systems in a pilot project that looks likely to be opened up to more clinicians next year.

While HealthLink and Dr Info have been in talks to introduce Care Insight to Australia, recent changes in health policy and health service realignment means that has been delayed somewhat. Australia also lacks a national secure network for general practices, meaning implementing it on the West Island will be infinitely more difficult than in NZ. “There are all sorts of firewalls – or no firewalls – to try to get through in Australia whereas that doesn’t apply in New Zealand,” he said. “In New Zealand we have pretty much have a complete, universal secure network running across every general practice. “The key to Care Insight is its reliability, so if you’ve got 100 medical practices and 10 of them are going offline all of the time, then it won’t work. Care Insight is a very elegant solution but it has to be choreographed correctly.”

Under the pilot, Hawke’s Bay DHB district nurses are being aligned to three general practices and are able to remotely access the practices’ Medtech32 clinical information system while in their patients’ homes. They are also able to file any actions they have taken, note anything they have observed and express any concerns. They can also schedule doctor’s appointments. The nurses are employed and resourced by Hawke’s Bay DHB but they are also closely aligned to the practice, at times physically basing themselves there when not visiting patients at home. Hastings Health Centre GP Alan Wright said the development of closer ties with district nursing staff was long overdue and the project was well integrated. “GPs will learn quickly, as I have, that these district nurses are at the coalface of healthcare, working with patients in their own homes,” Dr Wright said. “Giving them unrestricted access to our files can only benefit general practice. The inputting of their case notes can only advance our knowledge of our patients. Previously we might not have even known that a patient had been seen by a district nurse, and more importantly, what for.” The pilot, which was initiated by the general practices, also involves nurses working in the areas of assessment and advice regarding wounds, catheter and bowel management, administration of prescribed medications and support for patients with the management of other health issues.