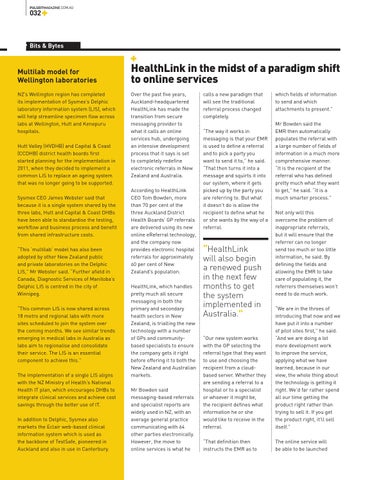 Multilab model for Wellington laboratories NZ’s Wellington region has completed its implementation of Sysmex’s Delphic laboratory information system (LIS), which will help streamline specimen flow across labs at Wellington, Hutt and Kenepuru hospitals. Hutt Valley (HVDHB) and Capital & Coast (CCDHB) district health boards first started planning for the implementation in 2011, when they decided to implement a common LIS to replace an ageing system that was no longer going to be supported. Sysmex CEO James Webster said that because it is a single system shared by the three labs, Hutt and Capital & Coast DHBs have been able to standardise the testing, workflow and business process and benefit from shared infrastructure costs. “This ‘multilab’ model has also been adopted by other New Zealand public and private laboratories on the Delphic LIS,” Mr Webster said. “Further afield in Canada, Diagnostic Services of Manitoba’s Delphic LIS is centred in the city of Winnipeg. “This common LIS is now shared across 18 metro and regional labs with more sites scheduled to join the system over the coming months. We see similar trends emerging in medical labs in Australia as labs aim to regionalise and consolidate their service. The LIS is an essential component to achieve this.” The implementation of a single LIS aligns with the NZ Ministry of Health’s National Health IT plan, which encourages DHBs to integrate clinical services and achieve cost savings through the better use of IT. In addition to Delphic, Sysmex also markets the Eclair web-based clinical information system which is used as the backbone of TestSafe, pioneered in Auckland and also in use in Canterbury.

HealthLink in the midst of a paradigm shift to online services Over the past five years, Auckland-headquartered HealthLink has made the transition from secure messaging provider to what it calls an online services hub, undergoing an intensive development process that it says is set to completely redefine electronic referrals in New Zealand and Australia. According to HealthLink CEO Tom Bowden, more than 70 per cent of the three Auckland District Health Boards’ GP referrals are delivered using its new online eReferral technology, and the company now provides electronic hospital referrals for approximately 60 per cent of New Zealand’s population. HealthLink, which handles pretty much all secure messaging in both the primary and secondary health sectors in New Zealand, is trialling the new technology with a number of GPs and communitybased specialists to ensure the company gets it right before offering it to both the New Zealand and Australian markets. Mr Bowden said messaging-based referrals and specialist reports are widely used in NZ, with an average general practice communicating with 64 other parties electronically. However, the move to online services is what he

calls a new paradigm that will see the traditional referral process changed completely. “The way it works in messaging is that your EMR is used to define a referral and to pick a party you want to send it to,” he said. “That then turns it into a message and squirts it into our system, where it gets picked up by the party you are referring to. But what it doesn’t do is allow the recipient to define what he or she wants by the way of a referral.

“HealthLink will also begin a renewed push in the next few months to get the system implemented in Australia.”

which fields of information to send and which attachments to present.” Mr Bowden said the EMR then automatically populates the referral with a large number of fields of information in a much more comprehensive manner. “It is the recipient of the referral who has defined pretty much what they want to get,” he said. “It is a much smarter process.” Not only will this overcome the problem of inappropriate referrals, but it will ensure that the referrer can no longer send too much or too little information, he said. By defining the fields and allowing the EMR to take care of populating it, the referrers themselves won’t need to do much work.

“Our new system works with the GP selecting the referral type that they want to use and choosing the recipient from a cloudbased server. Whether they are sending a referral to a hospital or to a specialist or whoever it might be, the recipient defines what information he or she would like to receive in the referral.

“We are in the throes of introducing that now and we have put it into a number of pilot sites first,” he said. “And we are doing a lot more development work to improve the service, applying what we have learned, because in our view, the whole thing about the technology is getting it right. We’d far rather spend all our time getting the product right rather than trying to sell it. If you get the product right, it’ll sell itself.”

“That definition then instructs the EMR as to

The online service will be able to be launched