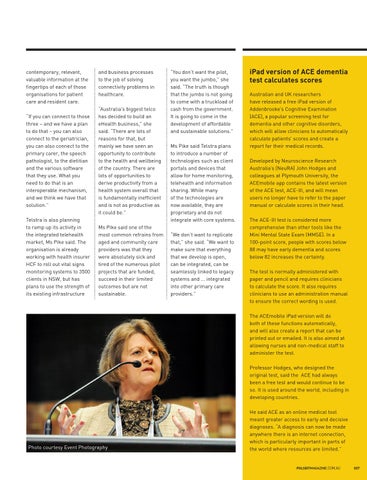 contemporary, relevant, valuable information at the fingertips of each of those organisations for patient care and resident care. “If you can connect to those three – and we have a plan to do that – you can also connect to the geriatrician, you can also connect to the primary carer, the speech pathologist, to the dietitian and the various software that they use. What you need to do that is an interoperable mechanism, and we think we have that solution.” Telstra is also planning to ramp up its activity in the integrated telehealth market, Ms Pike said. The organisation is already working with health insurer HCF to roll out vital signs monitoring systems to 3500 clients in NSW, but has plans to use the strength of its existing infrastructure

and business processes to the job of solving connectivity problems in healthcare. “Australia’s biggest telco has decided to build an eHealth business,” she said. “There are lots of reasons for that, but mainly we have seen an opportunity to contribute to the health and wellbeing of the country. There are lots of opportunities to derive productivity from a health system overall that is fundamentally inefficient and is not as productive as it could be.” Ms Pike said one of the most common refrains from aged and community care providers was that they were absolutely sick and tired of the numerous pilot projects that are funded, succeed in their limited outcomes but are not sustainable.

“You don’t want the pilot, you want the jumbo,” she said. “The truth is though that the jumbo is not going to come with a truckload of cash from the government. It is going to come in the development of affordable and sustainable solutions.” Ms Pike said Telstra plans to introduce a number of technologies such as client portals and devices that allow for home monitoring, telehealth and information sharing. While many of the technologies are now available, they are proprietary and do not integrate with core systems. “We don’t want to replicate that,” she said. “We want to make sure that everything that we develop is open, can be integrated, can be seamlessly linked to legacy systems and ... integrated into other primary care providers.”

iPad version of ACE dementia test calculates scores Australian and UK researchers have released a free iPad version of Addenbrooke’s Cognitive Examination (ACE), a popular screening test for dementia and other cognitive disorders, which will allow clinicians to automatically calculate patients’ scores and create a report for their medical records. Developed by Neuroscience Research Australia’s (NeuRA) John Hodges and colleagues at Plymouth University, the ACEmobile app contains the latest version of the ACE test, ACE-III, and will mean users no longer have to refer to the paper manual or calculate scores in their head. The ACE-III test is considered more comprehensive than other tools like the Mini Mental State Exam (MMSE). In a 100-point score, people with scores below 88 may have early dementia and scores below 82 increases the certainty. The test is normally administered with paper and pencil and requires clinicians to calculate the score. It also requires clinicians to use an administration manual to ensure the correct wording is used. The ACEmobile iPad version will do both of these functions automatically, and will also create a report that can be printed out or emailed. It is also aimed at allowing nurses and non-medical staff to administer the test. Professor Hodges, who designed the original test, said the ACE had always been a free test and would continue to be so. It is used around the world, including in developing countries.

He said ACE as an online medical tool meant greater access to early and decisive diagnoses. “A diagnosis can now be made anywhere there is an internet connection, which is particularly important in parts of the world where resources are limited.”