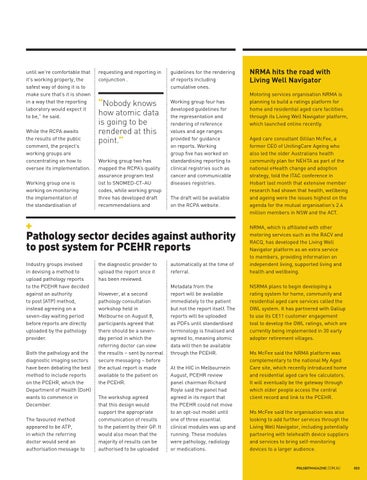 until we’re comfortable that it’s working properly, the safest way of doing it is to make sure that’s it is shown in a way that the reporting laboratory would expect it to be,” he said. While the RCPA awaits the results of the public comment, the project’s working groups are concentrating on how to oversee its implementation. Working group one is working on monitoring the implementation of the standardisation of

requesting and reporting in conjunction .

guidelines for the rendering of reports including cumulative ones.

“Nobody knows how atomic data is going to be rendered at this point.”

Working group four has developed guidelines for the representation and rendering of reference values and age ranges provided for guidance on reports. Working group five has worked on standardising reporting to clinical registries such as cancer and communicable diseases registries.

The draft will be available on the RCPA website.

Pathology sector decides against authority to post system for PCEHR reports Industry groups involved in devising a method to upload pathology reports to the PCEHR have decided against an authority to post (ATP) method, instead agreeing on a seven-day waiting period before reports are directly uploaded by the pathology provider. Both the pathology and the diagnostic imaging sectors have been debating the best method to include reports on the PCEHR, which the Department of Health (DoH) wants to commence in December. The favoured method appeared to be ATP, in which the referring doctor would send an authorisation message to

the diagnostic provider to upload the report once it has been reviewed. However, at a second pathology consultation workshop held in Melbourne on August 8, participants agreed that there should be a sevenday period in which the referring doctor can view the results – sent by normal secure messaging – before the actual report is made available to the patient on the PCEHR. The workshop agreed that this design would support the appropriate communication of results to the patient by their GP. It would also mean that the majority of results can be authorised to be uploaded

automatically at the time of referral. Metadata from the report will be available immediately to the patient but not the report itself. The reports will be uploaded as PDFs until standardised terminology is finalised and agreed to, meaning atomic data will then be available through the PCEHR. At the HIC in Melbournein August, PCEHR review panel chairman Richard Royle said the panel had agreed in its report that the PCEHR could not move to an opt-out model until one of three essential clinical modules was up and running. These modules were pathology, radiology or medications.

NRMA hits the road with Living Well Navigator Motoring services organisation NRMA is planning to build a ratings platform for home and residential aged care facilities through its Living Well Navigator platform, which launched online recently. Aged care consultant Gillian McFee, a former CEO of UnitingCare Ageing who also led the older Australians health community plan for NEHTA as part of the national eHealth change and adoption strategy, told the ITAC conference in Hobart last month that extensive member research had shown that health, wellbeing and ageing were the issues highest on the agenda for the mutual organisation’s 2.4 million members in NSW and the ACT. NRMA, which is affiliated with other motoring services such as the RACV and RACQ, has developed the Living Well Navigator platform as an extra service to members, providing information on independent living, supported living and health and wellbeing. NSRMA plans to begin developing a rating system for home, community and residential aged care services called the OWL system. It has partnered with Gallup to use its CE11 customer engagement tool to develop the OWL ratings, which are currently being implemented in 30 early adopter retirement villages. Ms McFee said the NRMA platform was complementary to the national My Aged Care site, which recently introduced home and residential aged care fee calculators. It will eventually be the gateway through which older people access the central client record and link to the PCEHR. Ms McFee said the organisation was also looking to add further services through the Living Well Navigator, including potentially partnering with telehealth device suppliers and services to bring self-monitoring devices to a larger audience.