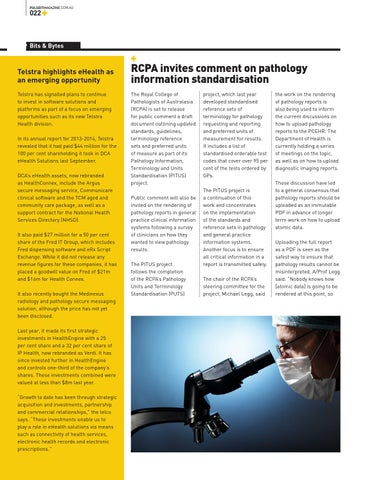 Telstra highlights eHealth as an emerging opportunity Telstra has signalled plans to continue to invest in software solutions and platforms as part of a focus on emerging opportunities such as its new Telstra Health division. In its annual report for 2013-2014, Telstra revealed that it had paid $44 million for the 100 per cent shareholding it took in DCA eHealth Solutions last September. DCA’s eHealth assets, now rebranded as HealthConnex, include the Argus secure messaging service, Communicare clinical software and the TCM aged and community care package, as well as a support contract for the National Health Services Directory (NHSD). It also paid $27 million for a 50 per cent share of the Fred IT Group, which includes Fred dispensing software and eRx Script Exchange. While it did not release any revenue figures for these companies, it has placed a goodwill value on Fred of $21m and $16m for Health Connex. It also recently bought the Medinexus radiology and pathology secure messaging solution, although the price has not yet been disclosed. Last year, it made its first strategic investments in HealthEngine with a 25 per cent share and a 32 per cent share of IP Health, now rebranded as Verdi. It has since invested further in HealthEngine and controls one-third of the company’s shares. These investments combined were valued at less than $8m last year. “Growth to date has been through strategic acquisition and investments, partnership and commercial relationships,” the telco says. “These investments enable us to play a role in eHealth solutions via means such as connectivity of health services, electronic health records and electronic prescriptions.”

RCPA invites comment on pathology information standardisation The Royal College of Pathologists of Australasia (RCPA) is set to release for public comment a draft document outlining updated standards, guidelines, terminology reference sets and preferred units of measure as part of its Pathology Information, Terminology and Units Standardisation (PITUS) project. Public comment will also be invited on the rendering of pathology reports in general practice clinical information systems following a survey of clinicians on how they wanted to view pathology results. The PITUS project follows the completion of the RCPA’s Pathology Units and Terminology Standardisation (PUTS)

project, which last year developed standardised reference sets of terminology for pathology requesting and reporting and preferred units of measurement for results. It includes a list of standardised orderable test codes that cover over 95 per cent of the tests ordered by GPs. The PITUS project is a continuation of this work and concentrates on the implementation of the standards and reference sets in pathology and general practice information systems. Another focus is to ensure all critical information in a report is transmitted safely. The chair of the RCPA’s steering committee for the project, Michael Legg, said