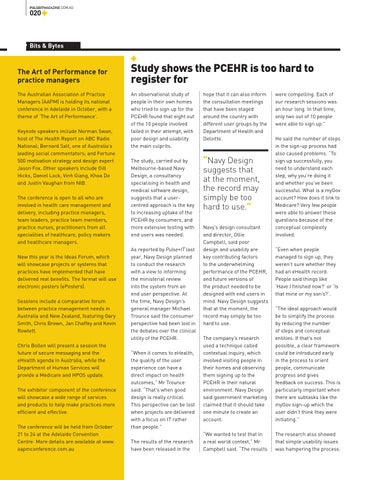 The Art of Performance for practice managers The Australian Association of Practice Managers (AAPM) is holding its national conference in Adelaide in October, with a theme of ‘The Art of Performance’. Keynote speakers include Norman Swan, host of The Health Report on ABC Radio National; Bernard Salt, one of Australia’s leading social commentators; and Fortune 500 motivation strategy and design expert Jason Fox. Other speakers include Gill Hicks, Daniel Lock, Vinh Giang, Khoa Do and Justin Vaughan from NIB. The conference is open to all who are involved in health care management and delivery, including practice managers, team leaders, practice team members, practice nurses, practitioners from all specialities of healthcare, policy makers and healthcare managers. New this year is the Ideas Forum, which will showcase projects or systems that practices have implemented that have delivered real benefits. The format will use electronic posters (ePosters). Sessions include a comparative forum between practice management needs in Australia and New Zealand, featuring Gary Smith, Chris Brown, Jan Chaffey and Kevin Rowlett. Chris Bollen will present a session the future of secure messaging and the eHealth agenda in Australia, while the Department of Human Services will provide a Medicare and HPOS update. The exhibitor component of the conference will showcase a wide range of services and products to help make practices more efficient and effective. The conference will be held from October 21 to 24 at the Adelaide Convention Centre. More details are available at www. aapmconference.com.au

Study shows the PCEHR is too hard to register for An observational study of people in their own homes who tried to sign up for the PCEHR found that eight out of the 10 people involved failed in their attempt, with poor design and usability the main culprits. The study, carried out by Melbourne-based Navy Design, a consultancy specialising in health and medical software design, suggests that a usercentred approach is the key to increasing uptake of the PCEHR by consumers, and more extensive testing with end users was needed. As reported by Pulse+IT last year, Navy Design planned to conduct the research with a view to informing the ministerial review into the system from an end user perspective. At the time, Navy Design’s general manager Michael Trounce said the consumer perspective had been lost in the debates over the clinical utility of the PCEHR. “When it comes to eHealth, the quality of the user experience can have a direct impact on health outcomes,” Mr Trounce said. “That’s when good design is really critical. This perspective can be lost when projects are delivered with a focus on IT rather than people.” The results of the research have been released in the

hope that it can also inform the consultation meetings that have been staged around the country with different user groups by the Department of Health and Deloitte.

were compelling. Each of our research sessions was an hour long. In that time, only two out of 10 people were able to sign up.” He said the number of steps in the sign-up process had also caused problems. “To sign up successfully, you need to understand each step, why you’re doing it and whether you’ve been successful. What is a myGov account? How does it link to Medicare? Very few people were able to answer these questions because of the conceptual complexity involved. “Even when people managed to sign up, they weren’t sure whether they had an eHealth record. People said things like ‘Have I finished now?’ or ‘Is that mine or my son’s?’.

The company’s research used a technique called contextual inquiry, which involved visiting people in their homes and observing them signing up to the PCEHR in their natural environment. Navy Design said government marketing claimed that it should take one minute to create an account.

“The ideal approach would be to simplify the process by reducing the number of steps and conceptual entities. If that’s not possible, a clear framework could be introduced early in the process to orient people, communicate progress and gives feedback on success. This is particularly important when there are subtasks like the myGov sign-up which the user didn’t think they were initiating.”

“We wanted to test that in a real world context,” Mr Campbell said. “The results

The research also showed that simple usability issues was hampering the process.