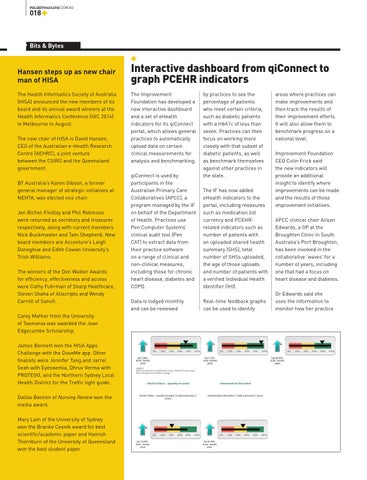 Hansen steps up as new chair man of HISA The Health Informatics Society of Australia (HISA) announced the new members of its board and its annual award winners at the Health Informatics Conference (HIC 2014) in Melbourne in August. The new chair of HISA is David Hansen, CEO of the Australian e-Health Research Centre (AEHRC), a joint venture between the CSIRO and the Queensland government. BT Australia’s Karen Gibson, a former general manager of strategic initiatives at NEHTA, was elected vice chair. Jen Bichel-Findlay and Phil Robinson were returned as secretary and treasurer respectively, along with current members Nick Buckmaster and Tam Shepherd. New board members are Accenture’s Leigh Donoghue and Edith Cowan University’s Trish Williams. The winners of the Don Walker Awards for efficiency, effectiveness and access were Cathy Fuhrman of Sharp Healthcare, Steven Shaha of Allscripts and Wendy Carroll of Sanofi. Carey Mather from the University of Tasmania was awarded the Joan Edgecumbe Scholarship. James Bennett won the HISA Apps Challenge with the DoseMe app. Other finalists were Jennifer Tang and Jarrel Seah with Eyenaemia, Dhruv Verma with PROTEGO, and the Northern Sydney Local Health District for the Traffic light guide. Dallas Bastien of Nursing Review won the media award. Mary Lam of the University of Sydney won the Branko Cesnik award for best scientific/academic paper and Hamish Thornburn of the University of Queensland won the best student paper.

Interactive dashboard from qiConnect to graph PCEHR indicators The Improvement Foundation has developed a new interactive dashboard and a set of eHealth indicators for its qiConnect portal, which allows general practices to automatically upload data on certain clinical measurements for analysis and benchmarking. qiConnect is used by participants in the Australian Primary Care Collaboratives (APCC), a program managed by the IF on behalf of the Department of Health. Practices use Pen Computer Systems’ clinical audit tool (Pen CAT) to extract data from their practice software on a range of clinical and non-clinical measures, including those for chronic heart disease, diabetes and COPD. Data is lodged monthly and can be reviewed

by practices to see the percentage of patients who meet certain criteria, such as diabetic patients with a HbA1c of less than seven. Practices can then focus on working more closely with that subset of diabetic patients, as well as benchmark themselves against other practices in the state. The IF has now added eHealth indicators to the portal, including measures such as medication list currency and PCEHRrelated indicators such as number of patients with an uploaded shared health summary (SHS), total number of SHSs uploaded, the age of those uploads and number of patients with a verified Individual Health Identifier (IHI). Real-time feedback graphs can be used to identify

areas where practices can make improvements and then track the results of their improvement efforts. It will also allow them to benchmark progress on a national level. Improvement Foundation CEO Colin Frick said the new indicators will provide an additional insight to identify where improvements can be made and the results of those improvement initiatives. APCC clinical chair Alison Edwards, a GP at the Broughton Clinic in South Australia’s Port Broughton, has been involved in the collaborative ‘waves’ for a number of years, including one that had a focus on heart disease and diabetes. Dr Edwards said she uses the information to monitor how her practice