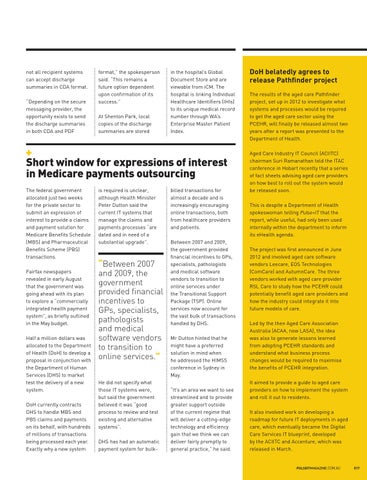 format,” the spokesperson said. “This remains a future option dependent upon confirmation of its success.” At Shenton Park, local copies of the discharge summaries are stored

in the hospital’s Global Document Store and are viewable from iCM. The hospital is linking Individual Healthcare Identifiers (IHIs) to its unique medical record number through WA’s Enterprise Master Patient Index.

Short window for expressions of interest in Medicare payments outsourcing The federal government allocated just two weeks for the private sector to submit an expression of interest to provide a claims and payment solution for Medicare Benefits Schedule (MBS) and Pharmaceutical Benefits Scheme (PBS) transactions. Fairfax newspapers revealed in early August that the government was going ahead with its plan to explore a “commercially integrated health payment system”, as briefly outlined in the May budget. Half a million dollars was allocated to the Department of Health (DoH) to develop a proposal in conjunction with the Department of Human Services (DHS) to market test the delivery of a new system. DoH currently contracts DHS to handle MBS and PBS claims and payments on its behalf, with hundreds of millions of transactions being processed each year. Exactly why a new system

is required is unclear, although Health Minister Peter Dutton said the current IT systems that manage the claims and payments processes “are dated and in need of a substantial upgrade”.

“Between 2007 and 2009, the government provided financial incentives to GPs, specialists, pathologists and medical software vendors to transition to online services.” He did not specify what those IT systems were, but said the government believed it was “good process to review and test existing and alternative systems”. DHS has had an automatic payment system for bulk-

billed transactions for almost a decade and is increasingly encouraging online transactions, both from healthcare providers and patients. Between 2007 and 2009, the government provided financial incentives to GPs, specialists, pathologists and medical software vendors to transition to online services under the Transitional Support Package (TSP). Online services now account for the vast bulk of transactions handled by DHS. Mr Dutton hinted that he might have a preferred solution in mind when he addressed the HIMSS conference in Sydney in May. “It’s an area we want to see streamlined and to provide greater support outside of the current regime that will deliver a cutting-edge technology and efficiency gain that we think we can deliver fairly promptly to general practice,” he said.

DoH belatedly agrees to release Pathfinder project The results of the aged care Pathfinder project, set up in 2012 to investigate what systems and processes would be required to get the aged care sector using the PCEHR, will finally be released almost two years after a report was presented to the Department of Health. Aged Care Industry IT Council (ACIITC) chairman Suri Ramanathan told the ITAC conference in Hobart recently that a series of fact sheets advising aged care providers on how best to roll out the system would be released soon. This is despite a Department of Health spokeswoman telling Pulse+IT that the report, while useful, had only been used internally within the department to inform its eHealth agenda. The project was first announced in June 2012 and involved aged care software vendors Leecare, EOS Technologies (ComCare) and AutumnCare. The three vendors worked with aged care provider RSL Care to study how the PCEHR could potentially benefit aged care providers and how the industry could integrate it into future models of care. Led by the then Aged Care Association Australia (ACAA, now LASA), the idea was also to generate lessons learned from adopting PCEHR standards and understand what business process changes would be required to maximise the benefits of PCEHR integration. It aimed to provide a guide to aged care providers on how to implement the system and roll it out to residents. It also involved work on developing a roadmap for future IT deployments in aged care, which eventually became the Digital Care Services IT blueprint, developed by the ACIITC and Accenture, which was released in March.