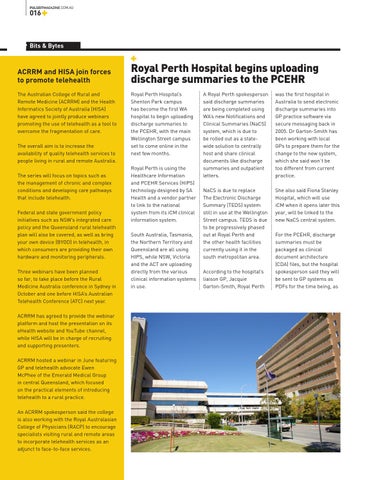 ACRRM and HISA join forces to promote telehealth The Australian College of Rural and Remote Medicine (ACRRM) and the Health Informatics Society of Australia (HISA) have agreed to jointly produce webinars promoting the use of telehealth as a tool to overcome the fragmentation of care. The overall aim is to increase the availability of quality telehealth services to people living in rural and remote Australia. The series will focus on topics such as the management of chronic and complex conditions and developing care pathways that include telehealth. Federal and state government policy initiatives such as NSW’s integrated care policy and the Queensland rural telehealth plan will also be covered, as well as bring your own device (BYOD) in telehealth, in which consumers are providing their own hardware and monitoring peripherals. Three webinars have been planned so far, to take place before the Rural Medicine Australia conference in Sydney in October and one before HISA’s Australian Telehealth Conference (ATC) next year. ACRRM has agreed to provide the webinar platform and host the presentation on its eHealth website and YouTube channel, while HISA will be in charge of recruiting and supporting presenters. ACRRM hosted a webinar in June featuring GP and telehealth advocate Ewen McPhee of the Emerald Medical Group in central Queensland, which focused on the practical elements of introducing telehealth to a rural practice. An ACRRM spokesperson said the college is also working with the Royal Australasian College of Physicians (RACP) to encourage specialists visiting rural and remote areas to incorporate telehealth services as an adjunct to face-to-face services.

Royal Perth Hospital begins uploading discharge summaries to the PCEHR Royal Perth Hospital’s Shenton Park campus has become the first WA hospital to begin uploading discharge summaries to the PCEHR, with the main Wellington Street campus set to come online in the next few months. Royal Perth is using the Healthcare Information and PCEHR Services (HIPS) technology designed by SA Health and a vendor partner to link to the national system from its iCM clinical information system. South Australia, Tasmania, the Northern Territory and Queensland are all using HIPS, while NSW, Victoria and the ACT are uploading directly from the various clinical information systems in use.

A Royal Perth spokesperson said discharge summaries are being completed using WA’s new Notifications and Clinical Summaries (NaCS) system, which is due to be rolled out as a statewide solution to centrally host and share clinical documents like discharge summaries and outpatient letters.

was the first hospital in Australia to send electronic discharge summaries into GP practice software via secure messaging back in 2005. Dr Garton-Smith has been working with local GPs to prepare them for the change to the new system, which she said won’t be too different from current practice.

NaCS is due to replace The Electronic Discharge Summary (TEDS) system still in use at the Wellington Street campus. TEDS is due to be progressively phased out at Royal Perth and the other health facilities currently using it in the south metropolitan area.

She also said Fiona Stanley Hospital, which will use iCM when it opens later this year, will be linked to the new NaCS central system.

According to the hospital’s liaison GP, Jacquie Garton-Smith, Royal Perth

For the PCEHR, discharge summaries must be packaged as clinical document architecture (CDA) files, but the hospital spokesperson said they will be sent to GP systems as PDFs for the time being, as